The Oyster Box embraces buckets of rubbish & says ‘NO’ to straws

March 8, 2018 | Umhlanga Tourism | Comments Off on The Oyster Box embraces buckets of rubbish & says ‘NO’ to straws

Plastic seems to be in everything and almost impossible to avoid these days. But with the advent of social media awareness around the ills of single-use plastic growing daily, various initiatives such as #refusethestraw, #plasticpollution and #singleuseplastics, have galvanised the public into using their voices and purchasing power to stamp out its gratuitous use. Umhlanga Tourism wholly supports these initiatives and is ambitiously hoping to make Umhlanga the first town in South Africa  free of single-use plastic. See an initiative started by The George as an example http://bit.ly/2EKqdz2.

The Oyster Box Hotel in Umhlanga has added its own voice to the stamping out of plastic. 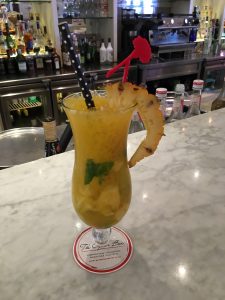 ‘Through our “Last Straw” campaign, we’ve done away with plastic drinking straws on the property,’ explained General Manager, Wayne Coetzer.  ‘As we are perched here on the edge of the magnificent Indian Ocean and as a single straw takes 200 years to break down, it was paramount that we join the “no to straws” movement in order to play our part.’

The hotel will provide biodegradable paper straws if requested.

In addition, for every bucket of rubbish collected from the beach by hotel residents only, the Hotel is offering a free cocktail or milkshake. The buckets are supplied by the hotel and once returned to the reception are redeemed for a drink voucher.