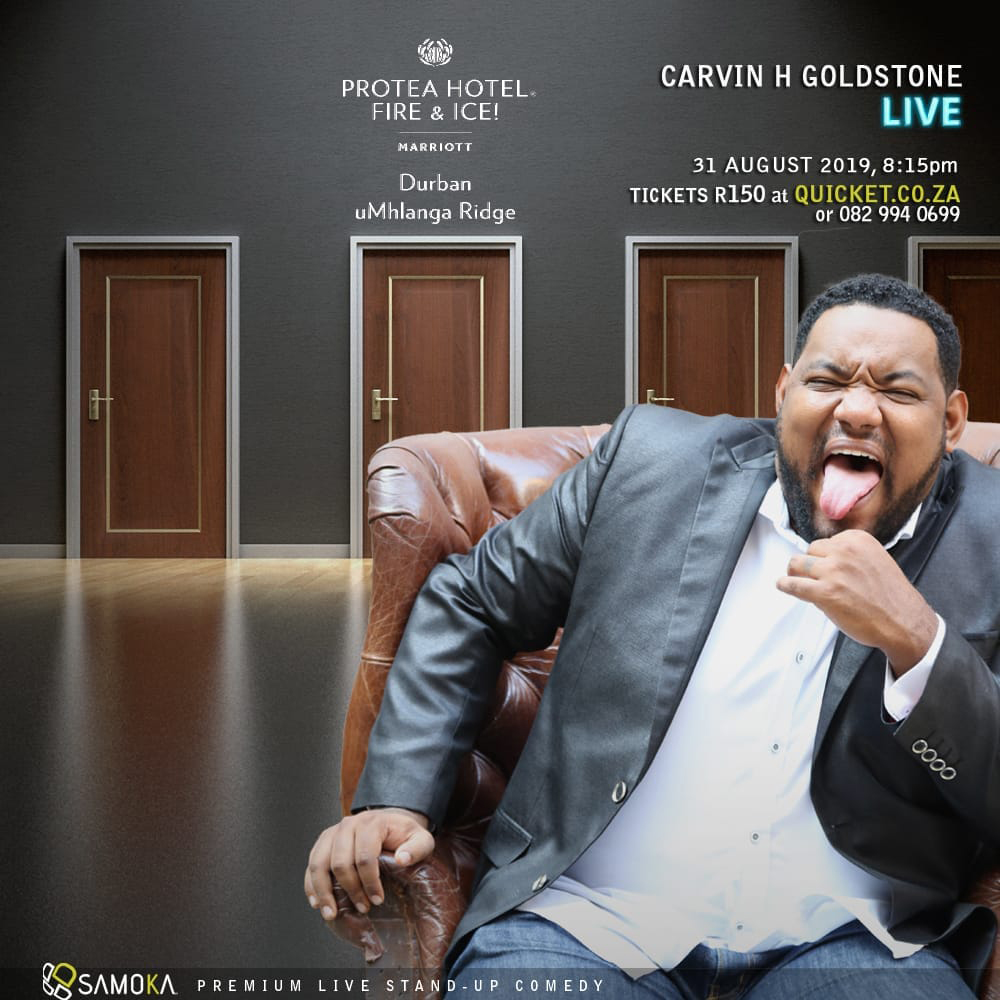 Globe-trotting comic Carvin H Goldstone will be giving his first solo KZN performance of the year at uMhlanga Ridge’s Protea Hotel Fire & Ice! on Saturday, 31 August. A son of the Durban soil, Goldstone combines a talent for observation, great storytelling skills and an infectious laugh. Umhlanga Rocks Tourism asked the big man about how he deals with hecklers, his favourite footballer, and what that “H” in his name mean, anyway…

Question: What can the audiences expect?

Answer: This is the first show I’m doing in Durban for the year… because I’ve been on the road and busy quite a bit. Most of the shows I’ve done have been outside of KZN and outside of the country. So the show is going to be a lot of stories from all the places I’ve been to and obviously coming back to KZN.

Q: Who will be sharing the stage with you?

A: It’s a solo show. I will have an opening act, Spencer Govender, who is a young comic from Sydenham. He’s been on the scene for about two years and he’ll be dishing out some of the early laughs, warming things up. He is a very funny young comic. And he’s excited.

Q: We understand your career as a comic has been going since 2006, that makes you about 13 years old as a performer. How are you coping with your teens?

A: I stopped doing comedy for about a year-and-a half after starting in 2006, but resumed. So as an actual performer I am probably 11, 11-and-a-half. I probably have had more growth and development since I left full-time employment as a journalist, which was in 2015. Before that I was kind of messing around a bit.

Q: When you are not on stage in Umhlanga where do you like to hang out?

A: A  lot of food places… there is always good food in Chartwell Drive. Most of the hotels in the Umhlanga area have good menus. You can basically pick one and you’ll get some good food.

I won’t say I try to buy a house; I try to look at the Umhlanga section in the property section. Then I decided, these prices can’t be right, man. Let me go there and look.

A: You don’t actually realise (chuckles) what living in Umhlanga means. Like it’s a joke… Oh! I’m from Umhlanga. I won’t say I try to buy a house; I try to look at the Umhlanga section in the property section. Then I decided, these prices can’t be right, man. Let me go there and look. They are  going to listen to my story, typical Durban approach, they are going to listen to my story and then give me the right price. Ja… the price is the price.

Q: What does the H in Carvin H Goldstone stand for and what’s with this initial business anyway… bit of an American touch?

A: No. My name is Carvin H. My parents named me Carvin H Goldstone. Actually my mother’s father is American. His name is Roger Evans. It’s not Roger H Evans and he is from New York, so it might be an American touch. But Carvin H is how I was born. It doesn’t stand for anything. People think it’s a second name, or an initial for a second name. Actually it’s part of my first name, Carvin H.

A: That’s a weird one: it’s usually Messi or Ronaldo. I am going to say Zlatan Imbramovitch, over Messi or Neymer or Ronaldo. The greatest footballer to have ever lived is Zlatan.

Q: Breyani or a boerewors roll?
A: That’s not even a competition. Of course breyani.

A: How about some classical kwaito. At what point does music become classical? Classical is the style, but after a while you say, ‘That stuff was classic’. We had a classic kwaito era with Mdu and Mapaputsi and… so kwaito.

Q: Biggest influence on your life?

A: My father because as a child I would often watch him tell stories. And watch people gather around him to listen to him talk. That left a huge impression on how I wanted to live my life.

Q: Favourite place for a bite to eat in greater Umhlanga?

A: A bite? For me anything that serves curry is a place I want to bite. I would say Little Gujarat.

Q: How do you deal with hecklers?

A: Well at my size I don’t have to deal with hecklers. I have done shows where every comic was heckled and then I stood up on stage and the hecklers all kept quiet for my whole set. I think because I have a very intimidating presence and massive body structure. And sometimes the way I dress on stage, when I walk on, like it’s very confusing. I once was at a gig standing at the door and some guy came to me and said, ‘Can you please get six seats for us’. I said. ‘Ok, I’ll get you six seats’. He gave me R100 thanks, thank you for helping. I was like, cool, took the R100. Then I said to the DJ, let’s start, and I walked on stage and they were all sitting in the front row (chuckles)… Cause they all thought I was the bouncer.

Q: What subject would you never joke about?

Q: Give us a word or three about race and humour in South Africa.

Q: EB White, the American critic, once said that explaining a joke is like dissecting a frog. What makes something funny and where do you look for your material or stories?

A: I try to live and then retell the experience and that’s what the show is going to be about. It’s going to be a retelling of all these experiences because the construction of jokes is a bit of an older approach to comedy… still relevant; a lot of people still do it. But it’s not how most people write today. Comedy has gone through a phase where it’s become very conversational. That’s how I get my stuff, through conversation.

Q: Complete this joke: Why did the chicken cross the road…

A: Because he was about to pass a Nandos, KFC… Chicken Licken, and thought he was not ready to walk through the valley of death.

• Award winning stand-up comedian Carvin H Goldstone features in a live Comedy Showcase at the Protea Hotel Fire & Ice! by Marriot, uMhlanga Ridge, Durban, for one night only, on Saturday 31 August, at 8.15pm. Tickets are R150. For enquiries, email samee.samoka@gmail.com or call 082 994 0699.

Posted in Umhlanga General, Umhlanga Rocks - Things to do