By George, it’s the World Cup!
Where to watch it

September 9, 2019 | Umhlanga Tourism | Comments Off on By George, it’s the World Cup!
Where to watch it 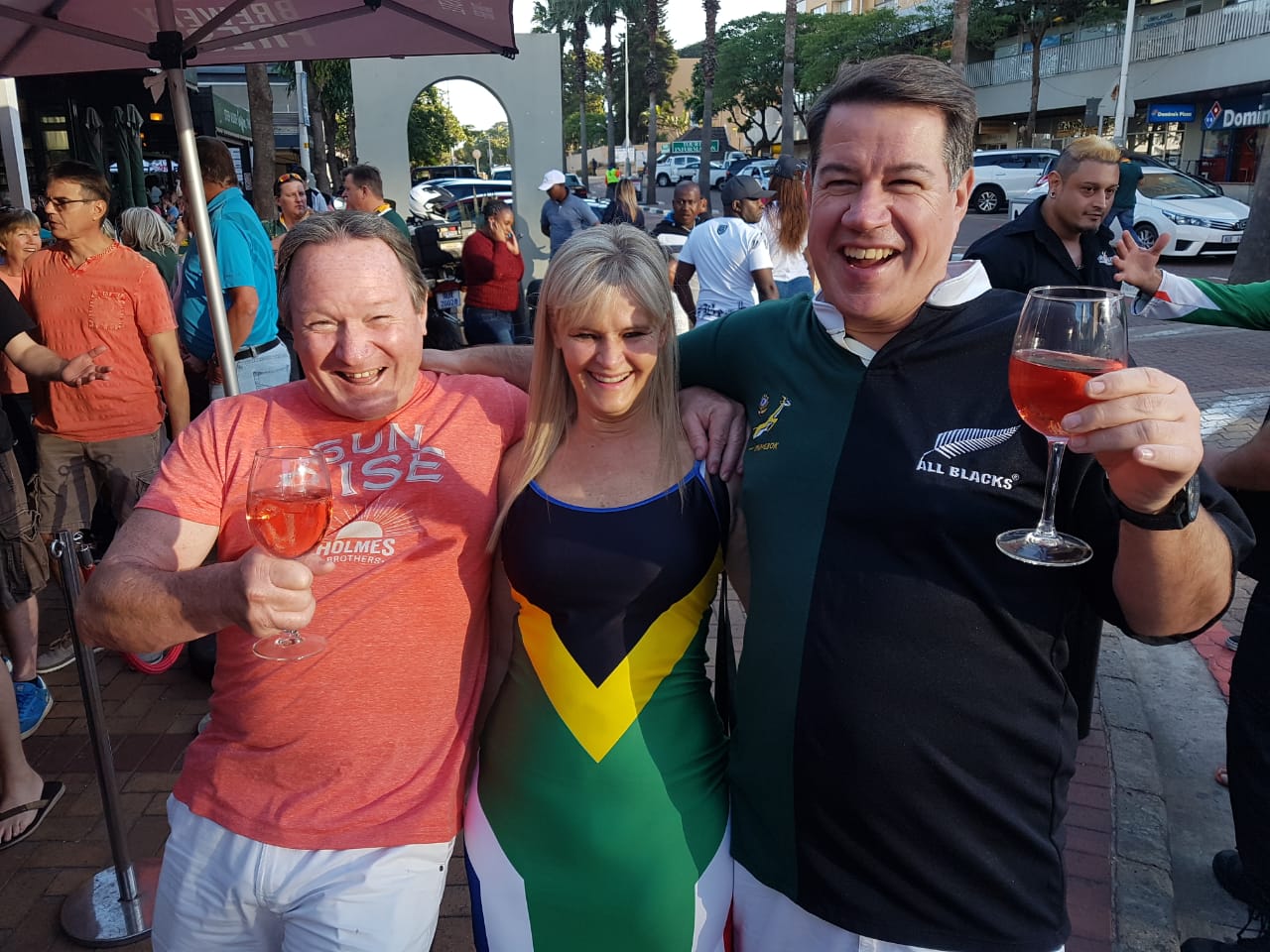 Heck, these days you could probably watch the World Cup on your smartphone. But would you want to? Fortunately for fans visiting Umhlanga or its surrounds during the course of the rugby showpiece – from 20 September to 2 November – there are more agreeable alternatives.

Here’s a potted selection to help you choose…

A sharp picture from a decent-sized TV set is non-negotiable if you want your Cup to runneth over. Most hotels or guesthouses will tick that box, but whether you are rooting for the Russians (drawn against hosts Japan for the opening match on September 20), backing the Boks (they meet favourites New Zealand on 21 September) or excited about the English (their first match is against Tonga on 22 September), you will want something more from a rugby watching venue.

In a word: atmosphere.

Denis Davidson, 70, a keen Springbok supporter, reckons you will find it at The George, a traditional English-style pub on Chartwell Drive, Umhlanga’s entertainment strip.

“All the locals go there and the visitors, from Pretoria and Johannesburg. It’s a very well known pub. It’s a popular pub with a lot of tourists… very festive,” said Davidson, who lives down the road and has been popping in regularly for the past 20 years.

“I’m a hardened drinker; I go to work to pay for my beers,” the commercial property broker said, tongue in cheek.

And South Africa’s prospects for the World Cup?

“We’ve got a good chance this time. The New Zealand match will give us a good indication,” he said.

Pete Ely, who co-owns The George with business partner Gordon Jestin, said they would be going all out to make the World Cup memorable.

He hoped to close Chartwell Drive during the singing of the national anthem whenever the Boks played.

Last year they did just that and a video clip of fans, arm in arm on Chartwell belting out Nkosi Sikelel’ iAfrika featured briefly in a stirring SuperSport television promo, #Stronger Together.

A big South African sports fan, Ely wore a purpose-made suit in the colours of the national flag,  earning himself no end of abuse in the London Underground when he went to England for the recent Cricket World Cup.

“Try explaining that one to your wife,” he told Umhlanga Tourism.

The Proteas’ dismal showing is of course best forgotten.

And Ely was now pinning his hopes on the Springboks, which has one of the best combinations fans have seen in many a World Cup, with depth in most positions.

A believer in the unifying power of sport, Ely said The George would not be following the wait-and-see approach of some fickle local fans.

“We have a fantastic team. We want to invest heavily, to be involved from the beginning,” he said.

With liquor company Distell, The George has already run a World Cup competition that drew 4000 entries. (The winner, Duncan Trench, received double tickets to Japan.) And more promotions were in the pipeline, including Springbok shirt giveaways, said Ely.

Steak & Ale, across the road from The George, also enjoys a strong local following.

It offers a wide selection of pub fare and while you are eating and drinking – on the deck if the weather is good – there are plenty of TVs for following the rugby.

Many of the other eating establishments in the Umhlanga Village have a bar with the obligatory flickering box, so if the rugby is more of a side dish, try these.

Hooters, on nearby Lagoon Drive, is worth a look-in too.

It’s perhaps better known for íts waitering staff, but is very much a sports bar, with plenty of television sets.

If you prefer your surroundings a little more swish and with a different kind of view, try the Lighthouse Bar.

It’s in the The Oyster Box hotel, overlooking the Indian Ocean and what with the sea vistas and all the decor, there’s plenty to take it in – that’s if you can tear your eyes away from the plasma screens.

You can sample a few of their fancy foreign beers while cheering on your team, but consider the house special – an Umhlanga Schling, a cocktail with a strong KwaZulu-Natal flavour, made from cane sugar and cane spirit.

A shopping centre might not strike you as an obvious destination for rugby supporters, but think again. While you are watching the maul your significant other can cruise the mall for a spot of retail therapy.

Unlike at the World Cup, everyone’s a winner.

The Dros, at Gateway Theatre of Shopping, fits the bill here.

Its decor is semi-rustic, suggestive of a wine cellar, except the place is far from subterranean.

The staff were friendly and attentive when Umhlanga Tourism bellied up to the bar to watch the Boks secure a bonus point victory over Australia in the opening match of the Rugby Championship (formerly the Tri Nations).

Speaking of cold and pints, the long-established Bush Tavern and Grill, has plenty of chilled beer on tap and is worth the trip, a little further afield, to Umdloti.

They offer reasonably priced meals and there are plenty of widescreen TVs.

What’s more,  if your team is taking a pasting, The Bush has slot machines where you can try for a win.

Heading in the opposite direction, south of Umhlanga to Durban North, there are a number of options.

Northwood Crusaders Sports Club, on Ranleigh Crescent, draws a big crowd and is very much part of the club rugby scene.

Neville de Billion, who has worked for many years in the Durban hospitality industry, recommends Connor’s Public House, in Mackeurtan Avenue.

“It’s sort-of an Irish pub. They’ve got lots of nice lady waitresses. And the guys all go there after work so it’s got a good, sporty atmosphere. Small, cosy, a lot of good food and service. It’s just a fun place to go.”

A Durban North lawyer, another pint-sized performer, also mentioned Connor’s, for a “properly local” Durban North experience, but gave her nod to a different Irish-themed establishment.

“We like Waxy O’Connors in Sunningdale, which is always busy, especially after work – TVs there too,” she said.

Our lawyer contact also singled out a “a popular but small place; keeps changing its name” in Davallen Road, La Lucia.

It’s known as The Aviator and describes itself as “neither restaurant nor pub, but a tasteful combination of both”.

Sounds a bit like the current Springbok World Cup squad – all the combinations are covered.

Plenty of reasons to cheer then.