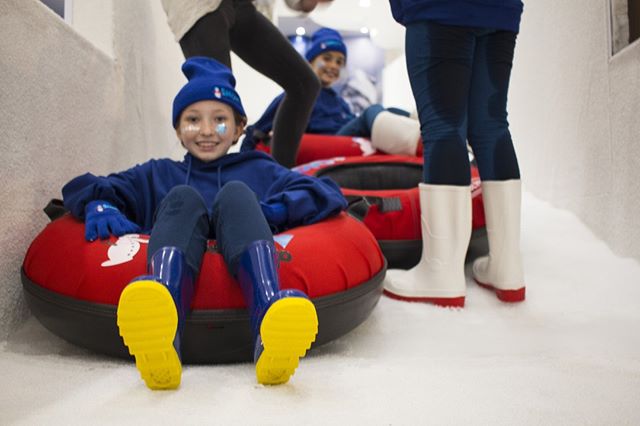 Spring may have sprung on the funshine coast, as the marketing men love to remind us, but up on the hill things have taken a turn for the wintery. A new pleasure dome, Snow Wonderland, has opened at Umhlanga’s Gateway shopping centre.

It will let funseekers experience, all year round, some of the delights normally associated with the higher latitudes; more to the point, it will let them play in real snow, or something near as dammit close to the genuine article.

The owners of Electric Avenue – the bowling alley, dodgem cars and arcade games parlour also on Gateway’s fourth floor – have thrown not only snowballs, but perhaps caution to the wind, with the opening on 9 September of Snow Wonderland.

They have spent, we were told, a cool R20 million to import a snow-making machine and related paraphernalia from the United States and to fit out the place.

It has snow slopes and a play area – a makebelieve street deep with the stuff and complete with old-style street lamps for a vaguely Victorian wintertime look.

The walls are papered with giant photographs of alpine scenes and under the gentle twighlighty, lighting it’s entirely possible to suspend belief.

Certainly your Umhlanga Tourism correspondent was pleasantly surprised by the setup.

We were met at the turnstile by the manager, Ryan Naidoo, for a quick tour on a sultry early spring afternoon on Wednesday, 11 September.

Sultry that is, except inside Snow Wonderland where it’s a little cooler.

At the counter there were branded scarfs, beanies, gloves and jackets on sale, but it was hardly freezing (even for a Durban boy). A normal jersey and closed shoes would do fine, although gumboots can be hired.

Also at the counter, for R25, you can stock up on a snowman-making kit. It contains a large plastic carrot suitable for a snowman’s nose, black buttons, a scarf and a hat.

The snow for the making the actual snowman comes free with the entry ticket – R95 for a 45 minute session.

It was far from peak hour when we popped in, but a man and his pre-school age daughter were having fun making snowballs. A young mother and her child arrived a little later to do the same.

You can pick up the snow in your hands and pack it into balls, just like you’ve seen it done in the movies, but there are also handy little devices – a cross between a pair of braai tongs and an ice-cream scoop – to make the job even easier.  Throwing your snowball at a friend or someone else’s child is verboten for safety reasons. But there are numbered holes in a wall and if you can hit the target, as it were, you win prizes.

All good, you say, but what of the thrills and spills on the slope?

Well Umhlanga Tourism will have no truck with armchair journalism, so we took one of the larger tubes (there are smaller ones for children five and under) and gave it a whirl.

The slope is perhaps 20m long, with a pitch of about 45 degrees.

It looks mild rather than wild and at first glance your correspondent found himself thinking: “These guys are taking the piste.”

But we are happy to report that the slope is surprisingly fast – just this side of scary, in fact.

Naidoo tells us that this is the typical reaction from children.

“At first they say it looks slow, but after they’ve gone on it once they get that rush… The kids have a ball,” he said.

For the little ones there’s also a gentler, nursery slope.

After-action-satisfaction has come in for serious consideration from Snow Wonderland’s developers too.

Here we are not talking a full-blown après ski scene – quel dommage!

During our visit there were no willowy, sunburnt blondes smoking Marlboro Lights or husky, ruddy-faced fellows (your correspondent excluded, of course) knocking back schnapps.

But there’s a fair-sized coffee area with benches and cold drinks are available too.

Naidoo said this was for health reasons – to keep the snow clean.

When it melts in the course of the day, he explained, the water trickles away and is collected and recycled – turned back into snow overnight. Dirty snow is disposed of.

But not to worry, some sustenance is available in the form of s’mores.

A s’more is a peculiarly North American campfire treat that seems to be catching on in this country.

Snow Wonderland supplies a s’mores kit containing two Marie biscuits, two marshmallows and two chocolate disc from which you can assemble a couple of sweet sandwiches.

Clearly it’s aimed at their young clientele including the children’s party market (there is a party venue) and with this in mind, the kit comes with a special heating device to melt it all together nice and gooey.

•  Snow Wonderland is open weekdays from 11am, with the final session starting at 8pm but on Friday’s it’s 10pm. On Saturdays, Sundays and holidays opening time is 9am with later finishing times except on Sundays.

There are plenty of fun things for the family to do near Umhlanga. Here are eight..