Wonder Market whips up a feast

October 21, 2019 | Umhlanga Tourism | Comments Off on Wonder Market whips up a feast 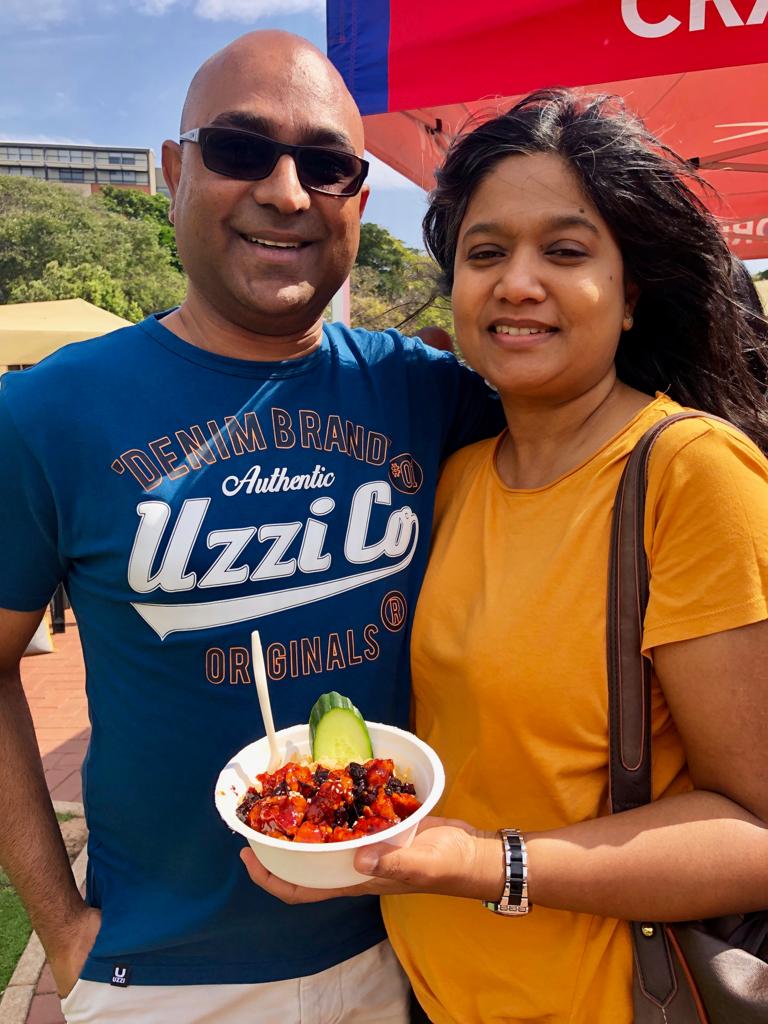 Umhlanga Tourism tries out some of the fine fare at the lakeside market.

‘Merhaba (hello there)…. Türkiye çok guzel,” I say, digging deep into the holiday phrasebook memory banks. Murat Oncel, looks up and smiles, one eye on me, the other on a lamb kebab he is busy singeing with a blow-torch.

Yes, Turkey is very beautiful, he agrees, playing the heat from the torch over the meat.

We are at Oncel’s Cafe Turka stall at the Wonder Market, in Umhlanga’s Chris Saunders Park. It’s a clear, if a little blustery, Sunday afternoon.

A small queue has formed, waiting for lunch and we chat as Oncel wields the torch or takes up an electric knife to shave off meat and stuff shawarmas.

My phrasebook Turkish now thoroughly spent, I mention Taksim, the nightlife district on the European side of Istanbul. And what’s this Erdoğan fellow up to? I ask of the controversial Turkish president, in a hapless attempt at conversation.

He tells me he came here four years ago, having married a South African woman he met at the hotel where he was working, in Marmaris, the Turkish coastal resort town.

A trained chef, Oncel now does markets in Durban and outside catering.

We order a lamb doner kebab – the chicken has sold out.

It comes with salad and sauces of your choice.

The meat was lightly charred with the right smokey flavour.

“Tastes good. This is fresh meat, no chemicals. Everything is fresh; people like,” Oncel says.

We shared our shwarma, sitting on one of the grassy terraces, overlooking the lake, in the heart of the park.

There are plenty of people milling about: women in hijabs; women with babies on their hips; the hip and the young; harassed-looking dads; children taking pony rides or watching the pelican and the Egyptian geese and their goslings.

By this stage we had already done with dessert, having started our snap survey of the Wonder Market food stalls with a visit to the Deli D-lights, a samosa specialist.

Owner Natasha Covenden suggests we try one of her Bar One-stuffed samoosas.

A chocolate bar is far from being a traditional filling for one of these deep-fried pastries. But it was surprising good, with a crispy wrapping and gooey centre.

There were many, more conventionally filled samoosas on offer too, including old favourites like spicy mince, potato, and sweet-corn.

After the Bar Ones, we tried a couple of samoosa versions of puri patha, which contain spicy madumbi leaves.

These were also good and Natasha says they are just the ticket for vegans.

After a bit more people watching from the terraces it was back to the food court to pay Chef Rum a visit at his falafel stand.

It was getting on by then – Wonder Market runs from 9am to 2pm – and they were sold-out.

But anxious not to disappoint your Umhlanga Tourism correspondent, Chef Rum managed to scrape together a solitary falafel with a dollop of hummus and brinjal salad, tahini and a bit of chilli.

We were told it was made with a “high concentration” of herbs, which gives its green colour and moistness.

It something of an Arab-Israeli hybrid. Sounds like a recipe for Middle East peace.

At any rate, the falafel tasted as it should, in fact there was something authentic about it which transported me back to Allenby Street, Tel Aviv, where I used to grab a bite just like it after a hard day labouring on building sites, gosh, about 16 years ago.

Next up was Italian fare at the Spaghetti & Ciao stall.

They were offering two pasta dishes: Alfredo and arrabbiata.

The arrabiata with its chilli, garlic and tomato sauce appealed. But one of the servers, Lyle Naidoo, soon swayed us to their signature, Alfredo dish.

While Naidoo’s sister-in-law and owner of the stall, Nikkisha Pillay, and her team were cranking out fresh fettuccine on a little pasta machine in the back, he explained the process.

The cooked pasta is added to a cream, garlic and butter sauce and when it’s ready, poured into a giant Parmesan cheese wheel and stirred about. Out it came melted-cheesy and rich. We took it away in a neat little box to enjoy on the terrace.

Customers can order it with spiced chicken or portabellini mushrooms.

While all this was going on the kids visited the Pancake Man.

If you are looking for pancakes you will have to go far to find anyone more experienced than the husband-and-wife team at this stall.

Rob and Lynn Hepple have been making the things professionally since the 1970s.

Hepple owned the popular Peter’s Pancake Place on Durban’s Brickhill (now Sylvester Ntuli) Road from 1976 to 1983 and says that during that period he broke the world record by frying 3001 pancakes in eleven-and-a-half hours.

He retired about eight years ago but says he does the markets to “keep out of mischief”.

My daughters opted for lemon-and-sugar, combining it with chocolate sauce, but their cousin, who is dairy intolerant, skipped the chocolate.

“Delicious and the pancakes were just right, not too crispy and not too floppy,” was the verdict from my nine-year-old daughter, Helena.

We ended our extended lunch by trying out some gangjong chicken from the Crazy Korean, who has featured in these blogs before.

It’s sweet, spicy stuff on a bed of rice, with a big slice of cucumber. Very more-ish.