November 4, 2019 | Umhlanga Tourism | Comments Off on Durban Brewing Company comes to the party 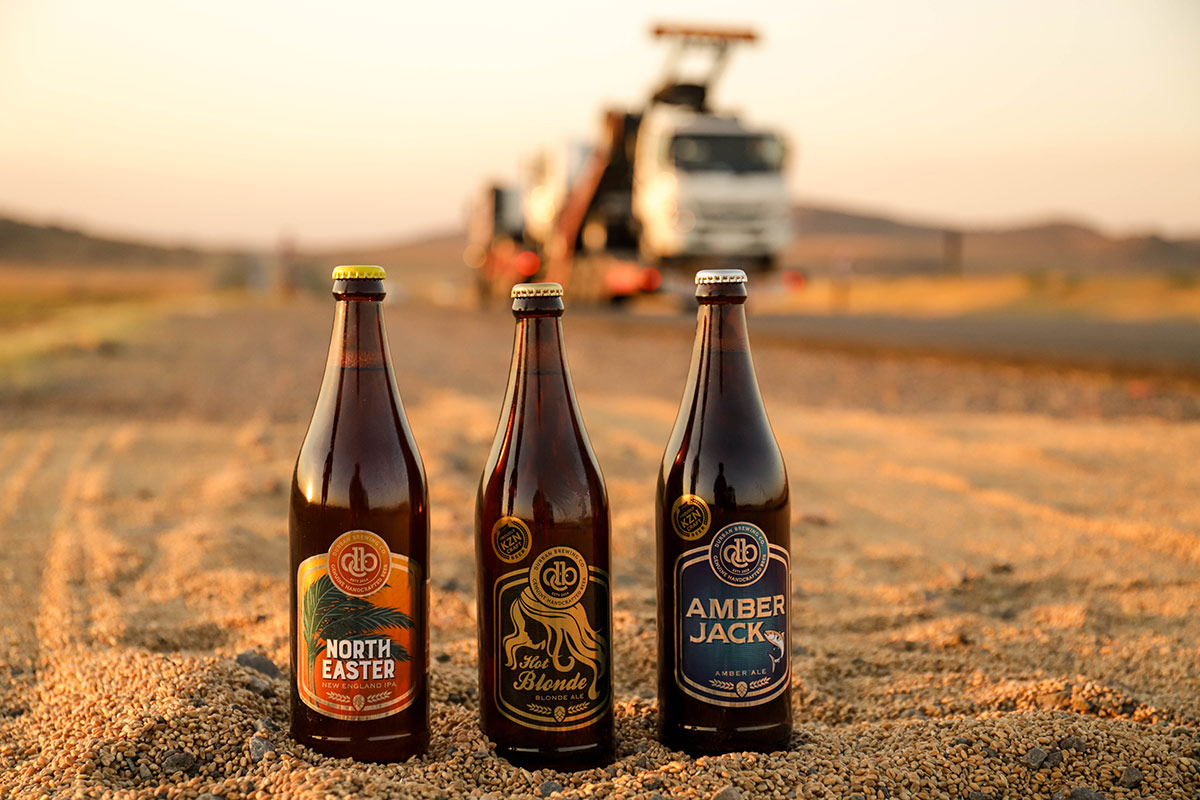 “Who doesn’t like a Hot Blonde?” asks Barry Schoeman.

Who indeed, but we haven’t called at the Durban Brewing Company’s pint-sized brewery in Redhill for locker room chat.

No, we are here to hear about the beer they make including one that bears that very name.

It’s around noon and our timing could hardly be better.

Schoeman, brewer Thulani Hlongwane, his assistant, Jaques Sweetland, operations man Dylan Mordaunt and the team at the Durban Brewing Company have just begun making a batch of about 500 litres of Amberjack.

There’s a heady scent of hops in the air, while steam rises from the mash tun, a big stainless steel heating tank insulated with wooden planking.

On alternate days of the week the team cooks up fresh batches of Blonde, or one of its other ales – Amberjack and North Easter.

“Fresh water, malted barley (we spied sacks of the stuff from Belgium), hops and yeast … nothing else,” says Schoeman.

But the ingredients come in many cultivars, varieties or roasts and by mixing and matching while making changes to quantities, temperatures and timing of the different processes, brewers can achieve big – or subtle – changes to the finished product.

Consistency is the refuge of small minds, Orson Welles once said. But this does not really apply to beer making.

The Durban Brewing Company chaps follow their recipes closely, controlling the process to make sure the glass of Hot Blonde you are drinking at the Durban Burger Co at Park Square in Umhlanga Ridge, tastes pretty much as you remember it from the last glass you had, perhaps a few months back, drawn from an entirely different batch.

Another area where brewing and consistency are bosom chums is cleanliness.

The Durban Brewing Company team were wearing white gumboots and there was much washing and hosing down of things happening when he visited.

“Everything is cleaned as it’s done,” Schoeman says, explaining there was “always a risk of infection which can spoil a batch.”

Brewing is a vast topic and brewers can spend a lifetime learning to do it better.

Fortunately for visitors, Schoeman has a bubbly enthusiasm for the subject.

He says he is happy to reveal a few of the mysteries of the brewing art and dip into some of the science – as deep or as shallow as you care to go.

“The front door is open, the back door is open. Guys, pull in and see what we do,” he says, indicating the little door at the front and the big roll-up one where the ingredients and finished product come in and out.

He took the Umhlanga Tourism team through the different steps of the mash-boil-ferment-brew-condition-bottle process; from the sacks of malted barley at the start, to the cold room where a natural carbonation process takes place after fermentation is done and before the beer is bottled or put in casks and sent to the customer.

It’s a fascinating journey and while the show-and-tell was going on the brewery staff quietly got on with their work.

Every now and then someone connects up a line or adds a jug of yeast to the fermenter.

There’s a clipboard hanging up and from time to time Hlongwane would note details on it including times and temperatures.

Schoeman and partners Allan Spies and Wally Pelser took over the brewery in June from Scott and Tarryn Hunter who founded it in 2014.

“We are looking to grow what is already a fantastic business,” said Schoeman.

He mentioned there were plans afoot to extend the existing popular range of ales, adding a lager and a pilsner in the coming months.

The trio was already involved in the liquor producing and retail business, selling to the public through markets, private parties, corporate events, golf days and the like through their bar cart business, Barsmiths.

So the acquisition of craft beer brewery was a good fit.

But enough business-speak. Let’s get to the drinking part.

We leave the tanks and chilling room and move to the bar area up front.

Pelser has just arrived and after saying hello and shaking hands he gets down to business.

With a flourish, he cracks opens three bottles, a nifty sleight of hand that employs his wedding ring to remove the crown caps with a pop.

“Isn’t that what they are for,” he smiles while pouring generous measures of Hot Blonde into tulip-style glasses.

Anyone who has ever attended a wine tasting will know the drill.

First you lift the glass and squint at in the light then bring it close to the schnoz, breathing in deeply. Swirl it around and then sip a little and let your taste buds get to work.

If you are so inclined, or have read the Bluffer’s Guides, now is the time to wax lyrical: yeasty, floral notes, hopsy, malty, earthy, fruity, spicy… a hint of….

But trying to use words to convey tastes and smells is a little like trying to describe colours to a blind man.

Suffice to say the Hot Blonde, which Schoeman calls an “easy drinking light ale”, is as the name suggests, absolutely gorgeous.

And unlike the butt of the all those jokes, there’s plenty going on upstairs with this blonde.

The flavours are certainly not overpowering, but they are there. It’s a world away from the bland fare you may be used to getting.

Schoeman says Hot Blonde is intended as a stepping stone into the world of craft beer drinking.

Next up was Amberjack, an amber ale, named for the game fish caught in these parts. Happily there’s nothing at all fishy-flavoured about it. It’s perhaps richer and a touch heavier on the palette than the blonde, but all the better for it. Moreish.

Last up we try the North Easter, described as a New England-style India Pale Ale (IPA).

The three ales all have names with a strong local flavour and the North Easter is no exception. But for your correspondent it was perhaps an unfortunate choice of names. It refers to the Beastly Easterly, the local wind that can ruin things for surfers, picnickers and lovers of the great outdoors.

Somehow it didn’t hold up next to the first two ales. These hings are subjective, however and I have yet to really warm to IPA’s.

Rather show me to the stepping stones and make mine a dozen.

To misquote Welles, I don’t know anything about beer but I know what I like.

•  To arrange a visit to the Durban Brewing Company, at 10 Moreland Drive, Red Hill, Durban North, contact Dylan Mordaunt, head of operations at  083 317 56 95 or visit their Facebook page.

The company’s beers are available from a host of outlets on the Funshine Coast, elsewhere in greater Durban and in the Midlands, including at a number of Tops at Spar branches, such as Eastmans, in Glen Ashley, Durban North.

Now read: Where to watch the rugger