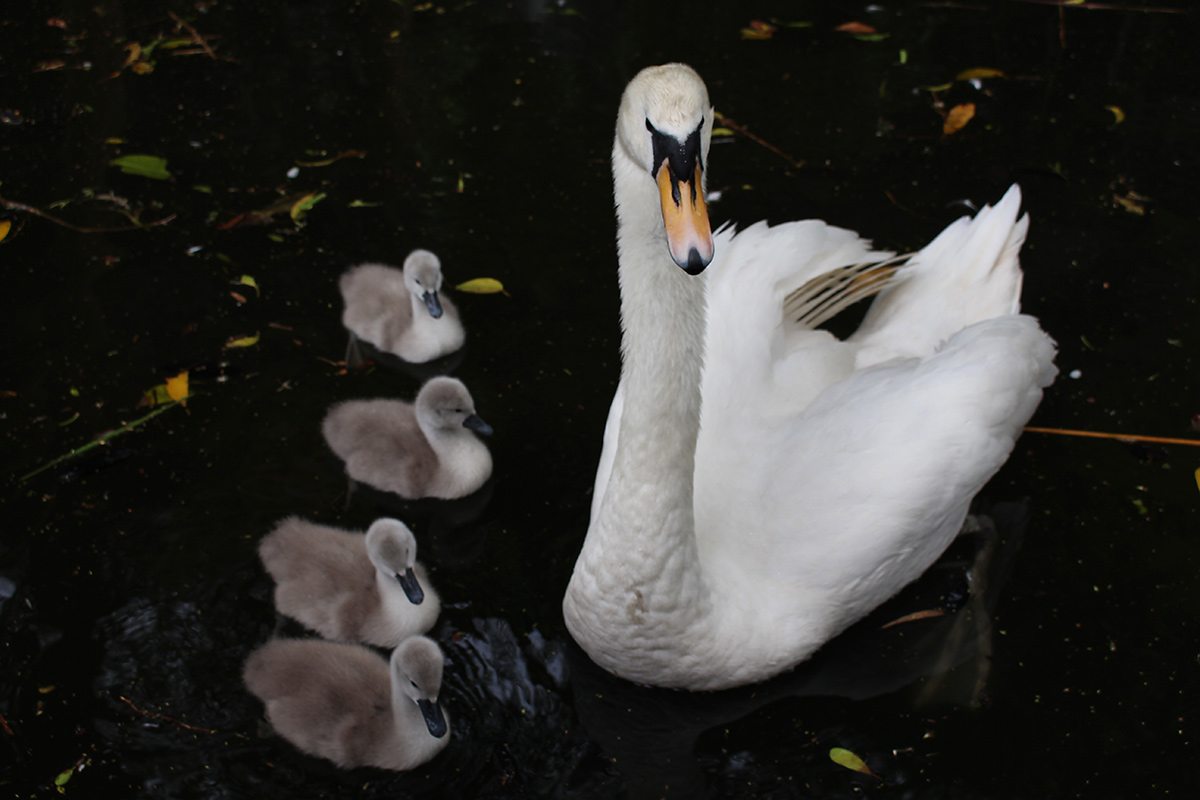 Forget what you’ve heard about ducklings and how poor, little and plug-ugly they are. Only the hard of heart could deny their charm. And when it comes to baby swans, well the little fellas are positively button cute.

If you want proof of this, get yourself down to the Umgeni River Bird Park, where four cygnets – as juvenile swans are properly called – are among the newest spring arrivals.

Umhlanga Tourism paid the avian zoo a visit on Thursday, 7 November, and found the four mute swans (Cygnus Olor) swimming happily under the eye of their mother and father – or in swankeeper parlance, the pen and cob.

Bird park curator Tarryn Bristow said the cygnets hatched a week earlier from a clutch of six eggs, two of which proved infertile.

They have dark little beaks and fluffy grey down.

Like many young animals they stuck close to their mother.

We watched as the pen helped her cygnets by taking duck pellets from their bowl and throwing it on the water where it could be easily reached.

Bristow said the pen taught her young how to bathe and if you are lucky you might even see the cygnets hitching rides on their mother’s back.

The cob, on the other hand, seemed to be taking more of a backseat in the infant-rearing department. It contented itself with guarding its little family, hissing at the photographer and keeping a wary eye on any wild Egyptian or spur-winged geese in case they came too close.

The swans live in a dam about the size of half a tennis court, seemingly content under a canopy of trees.

Bristow said apart from duck pellets they eat greens and herbs they foraged from the dam. When they were breeding they were even known to go for tilapia, she said.

None has names, but the adults were beautiful and the babies sweet to watch and you can buy a packet of duck pellets to feed them.

There’s a small rail separating spectators from birds and a good thing it was too.

Bristow said that those graceful parents can be “quite aggressive at the moment; very protective of their babies”.

“Don’t go anywhere near them, you will be in trouble,” she said, adding that their wings were fearsome weapons and the male had even broken a garden rake.

Meanwhile, the park was expecting more visits from the stork soon.

The lorikeets were expecting, as were the macaws and blue cranes.

The arrival of more blue cranes, the national bird, was particularly good news as the population of this species has been in decline for many years and was now classified as vulnerable.

Also expecting babies was the park’s pair of toucan. These were cute too, only don’t expect the chicks to have large colourful beaks – that comes later.

Now Read: How the Umgeni Bird Park started and more