And the beat goes on:
Big hitter back for Umhlanga’s carols concert

December 9, 2019 | Umhlanga Tourism | Comments Off on And the beat goes on:
Big hitter back for Umhlanga’s carols concert 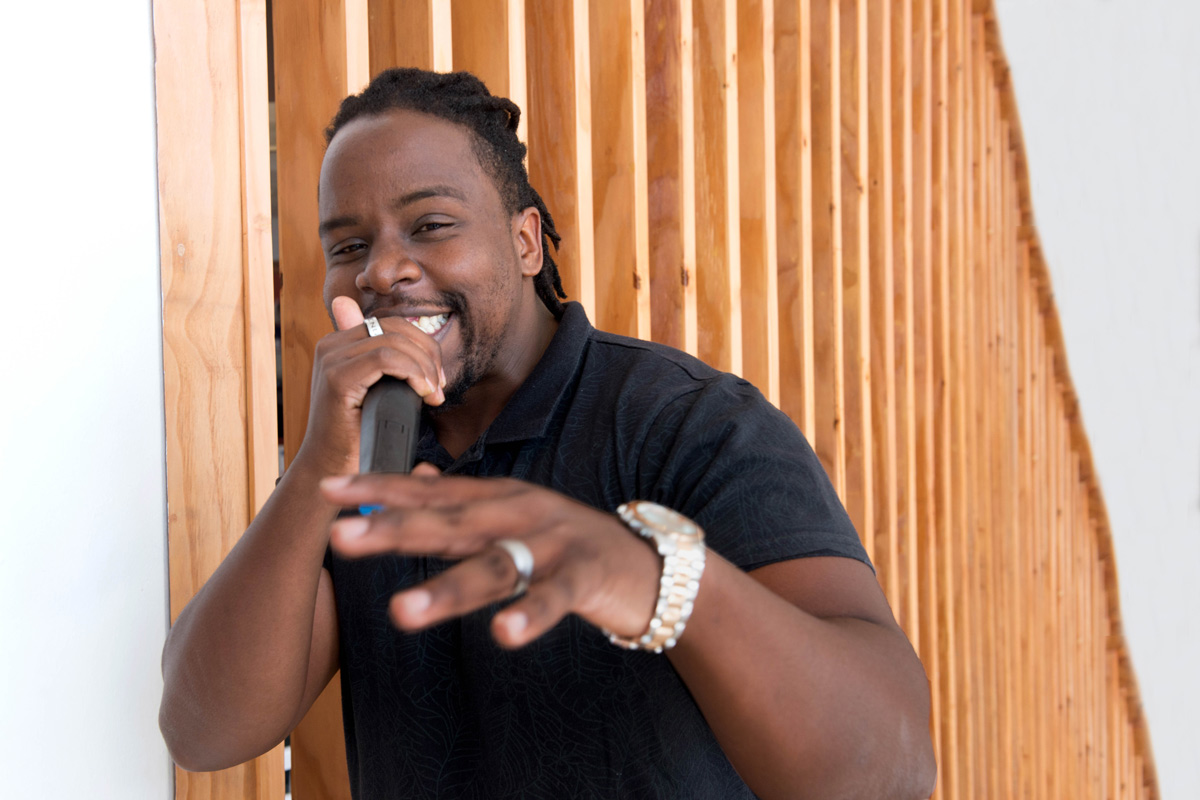 Most everyone loves the old Christmas favourites and yule certainly be getting that at Umhlanga’s Carols under the Stars concert. But to mix things up a bit, and back by popular demand, will be beatboxer Mikey Mathaba.

Mathaba, who is among an impressive lineup of artists set to entertain at the Thursday 19 December concert, at Granada Square, recently gave a taste of what carollers can expect.

The Human Sound Machine, as he is also known, performed at the official launch of Umhlanga’s Summer Festival last month, leaving many in awe of his vocal pyrotechnics.

So what exactly is beatboxing?

“Beatboxing is basically when you make music, just using your mouth. So, similar to acapella but you can do imitations of a drum, your percussion… It’s a matter of just breathing,” he told Umhlanga Tourism.

True, no doubt, but when applied to Mathaba’s work, it’s rather like saying: The Springboks are a good rugby team.

Like most beatboxers, Mathaba uses his mouth, lips, tongue, and voice to mimic the percussive sound characteristic of hip-hop and dance music.

But the 27-year-old recreates the drum machine beat favoured by the genres to such impressive effect that he needed to remind the launch audience it was all his own doing; no electronics involved.

In comes the snare drum sound.

In comes the syncopated beat.

In comes the sometimes shifting tempo and the throbbing bass.

Suddenly it sounds like a car is approaching and then driving on. You know the kind, where the sound system is geared to the low frequencies and turned up to 10.

Then he offers a snatch of didgeridoo (sans didg, of course) and a riff of old school rock.

The Durban North resident’s resumé suggests he’s nearly as flexible as his vocal chords. It stretches to include professional MCing, voice-over work and personal fitness training.

But the beatboxing goes right back.

As a lad he had a passion for music and loved singing.

“But I was bullied at a young age because of obviously my physique at the time. And they’re like, ‘Dude, you know what, just don’t do it’,” he said.

Today, thanks to his work as a personal trainer, Mathaba looks anything but puny, but at the time he felt  he had to put his beatboxing on ice.

Then in his matric year he had an epiphany.

“I went to a youth camp and the pastor there was like, ‘Guys, some of you guys are going to be gifted by the Holy Spirit, and you’re going to receive great gifts and that’s how mine came about. And when it first came, I ignored it, and then (later) and I had a vision of God saying, honour me with your beatboxing,” he said.

Mathaba said he has come to view beatboxing as a divine gift, adding that it helped open doors to other things, including MCing, where he uses it as an icebreaker. From there his career has taken him into commercial voiceovers, performances at Barnyard Theatres and at Kings Park before a Sharks match.

This year he joined Durban Youth Radio and now has his own show, doing the 7pm to 10pm slot, where he is known as Mr Golden Voice.

Mathaba’s career as a personal fitness trainer makes for a fascinating story in its own right and started in a sense in high school when he first got into mixed martial arts.

It continues to this day to encompass training beginner boxers, sparring with pros and even an ambition to fight himself.

So much so it has earned Mathaba another catchy sobriquet – the Boxing Beatboxer.

But enough back story. What can carolers expect from him on the 19th?

“A little bit, just a tiny bit of a Christmas vibe. But more of a party flavoured Christmas,” he said “I’ve been trying to sing We Wish You a Merry Christmas and Jingle Bells and then trying to add a beatbox on to it. But man, it is so difficult. But yeah, but I’m still trying to work on it,” he said.

The beat, as they say, goes on.

Also on the bill at Umhlanga’s Carols under the Stars concert from 6pm are:

• University of KwaZulu-Natal honours graduate in music, Tory Du Plessis who has been a regular on the Durban music and theatre scene for many years;

• Slindo Zondo, who recently wowed the crowds on M-Net’s The Voice; and

• Saxophonist Kristy Van der Linde, who is a teacher by day and a saxophonist by night.

Shelley McLean will again be coordinating the concert, with Marion Loudon playing master of ceremonies and singing.

The audience is invited to sing along to favourite old carols like Away in a Manger; Joy to the World; Silent Night, Once in Royal David’s City and Hark the Herald Angels Sing.

And to cap it all, Father Christmas will be arriving on the back of a shiny Harley Davidson.

Umhlanga Tourism committee chairman, Peter Rose said, “Being a part of a carols concert is always an uplifting way to start the festive season.”

He said Umlanga’s carols concert was free to the public but encouraged people bring along a gift suitable for donation to an underprivileged child for Christmas.