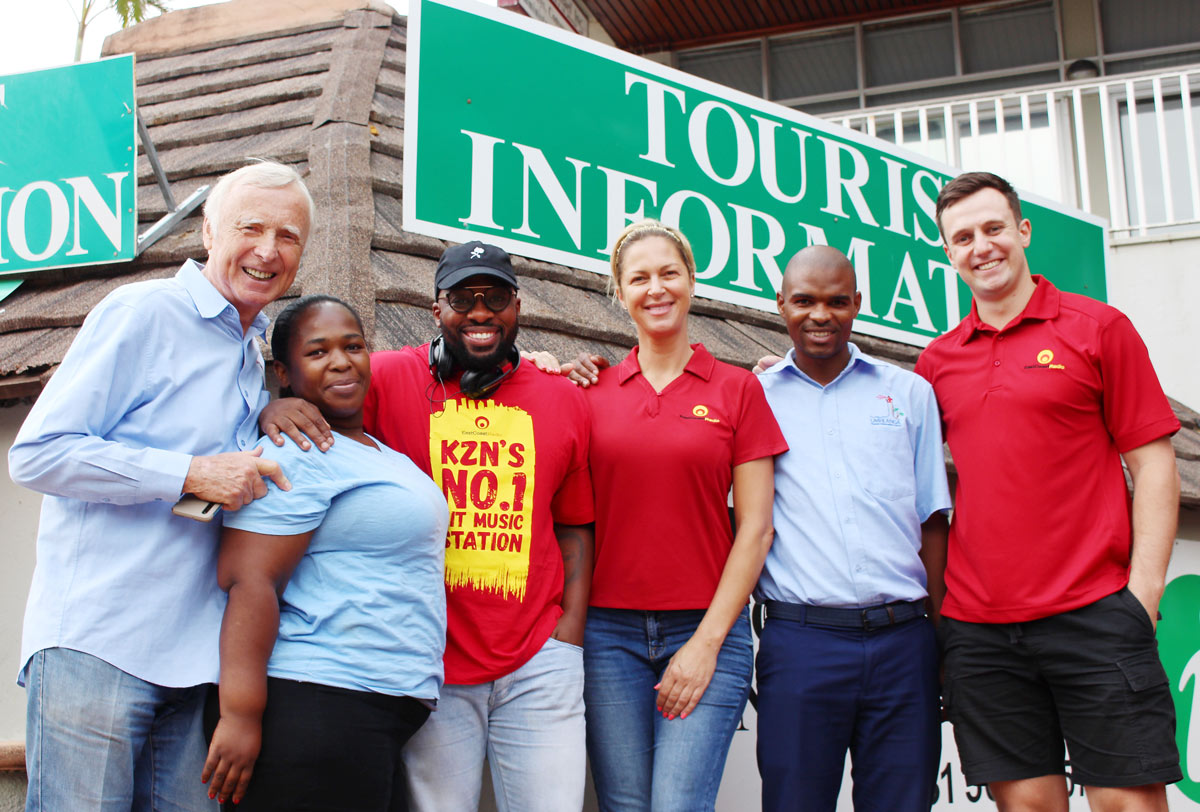 Umhlanga Tourism welcomed East Coast Radio to its offices on Thursday, on the eve of the 2019 Summer Festival. And ECR Drive show presenters Mags Westerhof and Bongani Mtolo were rich in their praise for the area’s charms.

Mtolo told listeners he was green with envy when he arrived in Umhlanga Rocks to prepare for the 3pm-6pm show, only to spot a large, late lunchtime crowd, unwinding in Chartwell Drive’s bars and restaurants.

But somebody, it seemed, had to work.

Westerhof was similarly enthused and told ECR‘s more than 1 million listeners that the  entertainment strip, with its cafe scene, reminded her of Europe. “Not that we want to be in Europe,” she added.

The holidays are now almost upon us. The sun on Thursday made a game effort to come out after a long week of rain. And the radio team refused to be panicked by a momentary dip in power.

Shed your worries rather, was the message. And we have plenty of ways to help you do just that.

Umhlanga Tourism’s Sabelo Didi shared with Mtolo and the listeners some of the attractions the region has to offer. He made particular mention of the festival, which starts on Saturday, 14 December.

Miss South Africa, Zozibini Tunzi, was on Sunday, 8 December, crowned Miss Universe and perhaps with that sweet victory in mind, Didi waxed lyrical about the association’s very own Miss and Mr uMhlanga pageant.

“Gorgeous, stunning and super-looking ladies,” said Didi of the lookers expected to grace the 21 December event.

The pageant is one of the highlights of the Umhlanga Summer Festival, which continues through to 23 December.

But there’s a lot more on offer at Umhlanga than an admittedly beautiful beach and a score or two of pageant lovelies.

Mpho Mbuli, marketing manager Africa for Durban Tourism, in an interview with your correspondent, mentioned Umhlanga’s nightlife, shopping and dining at Gateway mall, the Pearls complex. She also sang the praises of the architectural gem that is the whale-bone pier.

She said Durban Tourism had joined forces with ECR to use outside broadcasts to profile the city’s nine, regional community tourism organisations.

Mbuli said they were keen to remind locals, some of whom may be returning to the city after a long absence as well as newcomers about what its regions have to offer

She said the publicity campaign kicked off at Umlazi Mega City mall earlier this month, with the Umhlanga broadcast being the second.

The public not to miss out on the pageant and said Miss Universe had “brought back the excitement”, she said.

She also mentioned the Umhlanga Summer Festival Carols under the Stars concert, which takes place at Granada Square, on Chartwell Drive, on Thursday 19 December from 6pm.

“We are reaching out to the people who have returned home… we are saying, guys come out and join us,” said Mbuli.