Hands up for festival fun

December 16, 2019 | Umhlanga Tourism | Comments Off on Hands up for festival fun 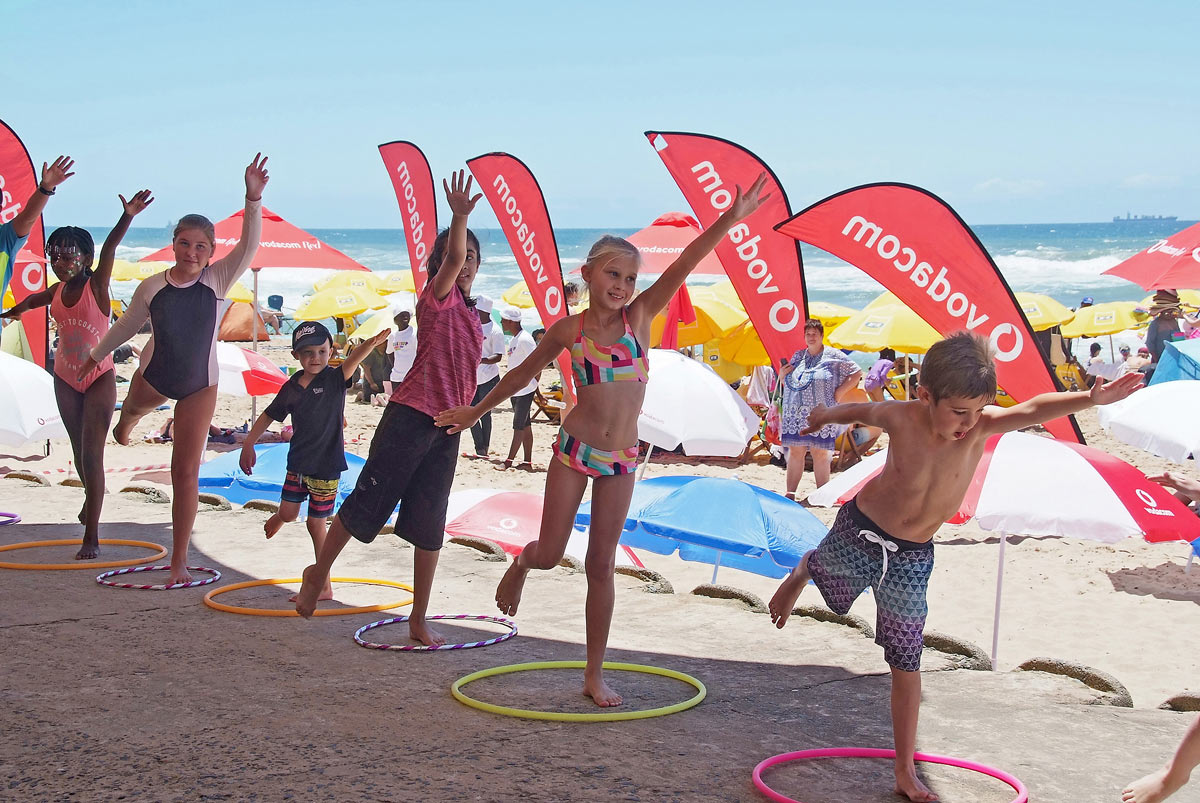 On a gorgeous day, with the skies clear, the beach a sea of brollies and the sea itself part azure, part navy, it’s hard to top Umhlanga. But the capital of the FunShine Coast was far from resting on its laurels on Monday.

As a sizeable Day of Reconciliation crowd spread its towels on Main Beach, the Summer Festival was in full swing at the nearby Millennium Stage.

Kevin Ellis, programme co-ordinator, told the audience that fun aside, the idea was to promote fitness.

But if his words were intended to spur the sedentary out from under their umbrellas or to leave aside sunbathing and spring into action, they had little effect.

On the other hand, if he was addressing the participants, it was a case of preaching to the converted.

The score or so children already on the stage would not be reconciled to the idea of sitting put, public holiday or otherwise.

They joined in the day’s activities with vim, competing for fun and a pile of prizes from Coca-Cola, Vodacom, Samsung and Gateway shopping centre.

It was enough to beat Taylor Tozer, a 12-year-old from Johannesburg, who had been going great guns until her hoop slipped at 89.

Next up was a mini-fun Olympics, which involved much running backwards and forwards, hopping and jumping. The same hoops did duty here as obstacles and stopping points in a variant of musical chairs.

Ellis was able to entice a parent to join the mini-Olympics.

Chantal de Sousa, an Umhlanga housewife, proved a good sport and was rewarded for her efforts with prizes courtesy of Coca-Cola.

In the children’s event, sister and brother Kayla, 10, and Zvi Bloch, 8, tied winners.

He said they come down every year.

The Irish, if any were around, might have said it was all a good craic.

However, Luke Rundle and Danilo Giuricich, two 11-year-olds who attend St David’s in Inanda, Johannesburg, would have called it a good crack.

The lads won the egg tossing competition. They succeeded in throwing an egg to each other without breaking it over successively greater distance. Eventually when the two were nearly 20 metres apart it splattered into the sand.

The tug-o-war, also in front of the stage, started as a boys vs girls battle. But lost any resemblance of a fair fight as a number of adults threw in their weight. The adults vs children contest went to the kids, but with a few husky fellows giving the youngsters a hand.

It was all good fun of course and Ellis and Gareth Greaves (the assistant coordinator and a dab hand at kiddies face painting) have promised more fun and games tomorrow.

The festival started on Saturday, 14 December, but with a ferocious north-easter and later a westerly buster blowing, the beach at the weekend was only for the most desperate holidaymakers.

But the good news is that fine weather and mostly light winds were expected for much of the week ahead. And sunny skies and a light breeze were predicted for the Miss and Mr Umhlanga pageant.

• Another Umhlanga Summer Festival date to diarise is the Carols under the Stars concert. It takes place at Granada Square shopping centre, Chartwell Drive, on Thursday, 19 December, from 6pm.