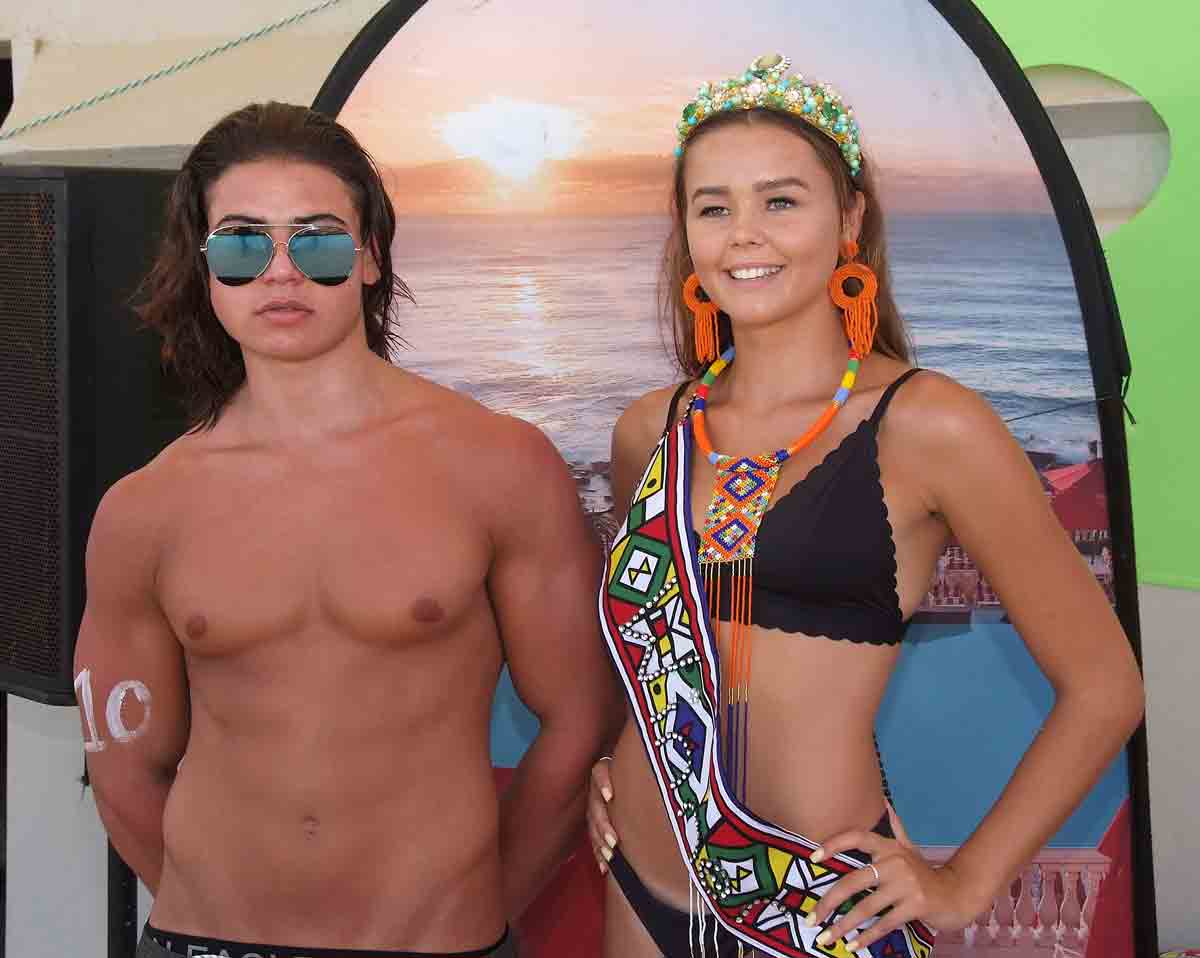 Forget the clichés about tantrums and tiaras. While the Miss and Mr Umhlanga pageant was under way at Main Beach at the weekend, one of the eventual winners was torn between the onstage excitement and the drama of a rescue and a broken leg incident nearby.

But Janique Pretorius,16, kept her cool on a steamy Saturday, 22 December, afternoon.

And telling the audience that she was a member of the uMhlanga Rocks Surf Lifesaving Club, would have done her chances no harm.

At any rate, with her sweet smile and trim beach body, she was already on the winning track.

“I am very comfortable with people. I love people,” she said later of any ambassadorial work she might be called on to play for Umhlanga Tourism.

The Danville Park Girls High School pupil who starts Grade 11 in 2020, walked away with R5000 in cash and other prizes.

The La Lucia resident said she loved surf lifesaving. She took up the sport two years ago on her mom’s suggestion, shaking off a dislike for water.

Like many amateur lifesavers, Janique does duty on public holidays when the professionals take a break.

She said she would be at Umhlanga on Christmas day.

It’s always a busy time for rescue workers, but Janique seemed to relish the prospect.

“There is no place like the beach. It’s my second home,” she said.

In a post-win interview, the Varsity College law student said he enjoyed working out in the gym and keeping fit.

Apart from a beefy torso and dark tresses, Greg’s shtick involved staring seductively at the judges over the top of the mirror finished, aviator sunglasses perched on the end of his nose.

Whatever it takes, sometimes…

Greg said he entered the pageant at the last minute, on a whim.

He had no modelling experience but was “just blessed with everything”, he told Umhlanga Tourism with only the barest hint of irony.

Modesty, especially of the false variety, can be an overrated virtue and Greg can at least claim a local connection.

His family have a holiday-stay in Umhlanga which makes him a homeboy of a sort.

He will be in town until the 27 December before leaving to continue his holiday in Cape Town.

Ah, to be a student again.

The Miss Umhlanga attracted 23 entries. And second and third place went to Amber Austen, 22, and Palesa Mchunu, 21, of Johannesburg and Sydenham, Durban, respectively.

The first and second runners-up, men and women, received R3000 and R1000 each, among other prizes, including Afro-themed sashes and tiaras designed by pageant stylist Gareth Greaves.

Amber emerged as something of an audience favourite.

Unlike most of the Miss Umhlanga contestants who towered over her in super-high heels, she turned up barefoot and appeared entirely confident in her skin and yellow two-piece.

Like Greg, she too decided on the spur of the  moment to enter the competition.

“I was lying on the beach, I just heard the announcement,” said Amber.

She said she called her mom, who encouraged her to “go for it”.

The 22-year-old said she hurried to draw entry money and to find a toy for donation to a needy child, as required of all contestants.

There was barely time for makeup (fortunately she was already wearing false eyelashes) and to scrape her hair into a high ponytail.

All very last-minute, but it must be said that Amber is no newcomer to pageantry.

Second runner-up Palesa told the judges she was a firm feminist.

Women, said the University of KwaZuu-Natal Politics and Criminology graduate, should celebrate who they are. They should not worry about the shape of their bodies.

As is the way with these things, the feisty 21-year-old was one of those women blessed by Mother Nature. In a word: gorgeous.

It must run in the family because the Bluff beauty’s mother, Wilma McKenzie, 43, won the pageant’s mum’s event.

Apart from all the bodies beautiful, there was a troupe from Dance Magic, the New Germany, Durban, line dance studio. They entertained the crowd with a few energetic routines and some snappy choreography.

Speaking of snappy and energetic, the pageant’s long-serving co-ordinator Kevin Ellis joined the dancers briefly, showing why he’s a world champion in the discipline himself.

A slice of street, a touch of tango and a bit of ballroom, said Ellis, explaining line dancing to the audience.

It all made for a winning mix. A bit like the Miss and Mr Umhlanga you might say.