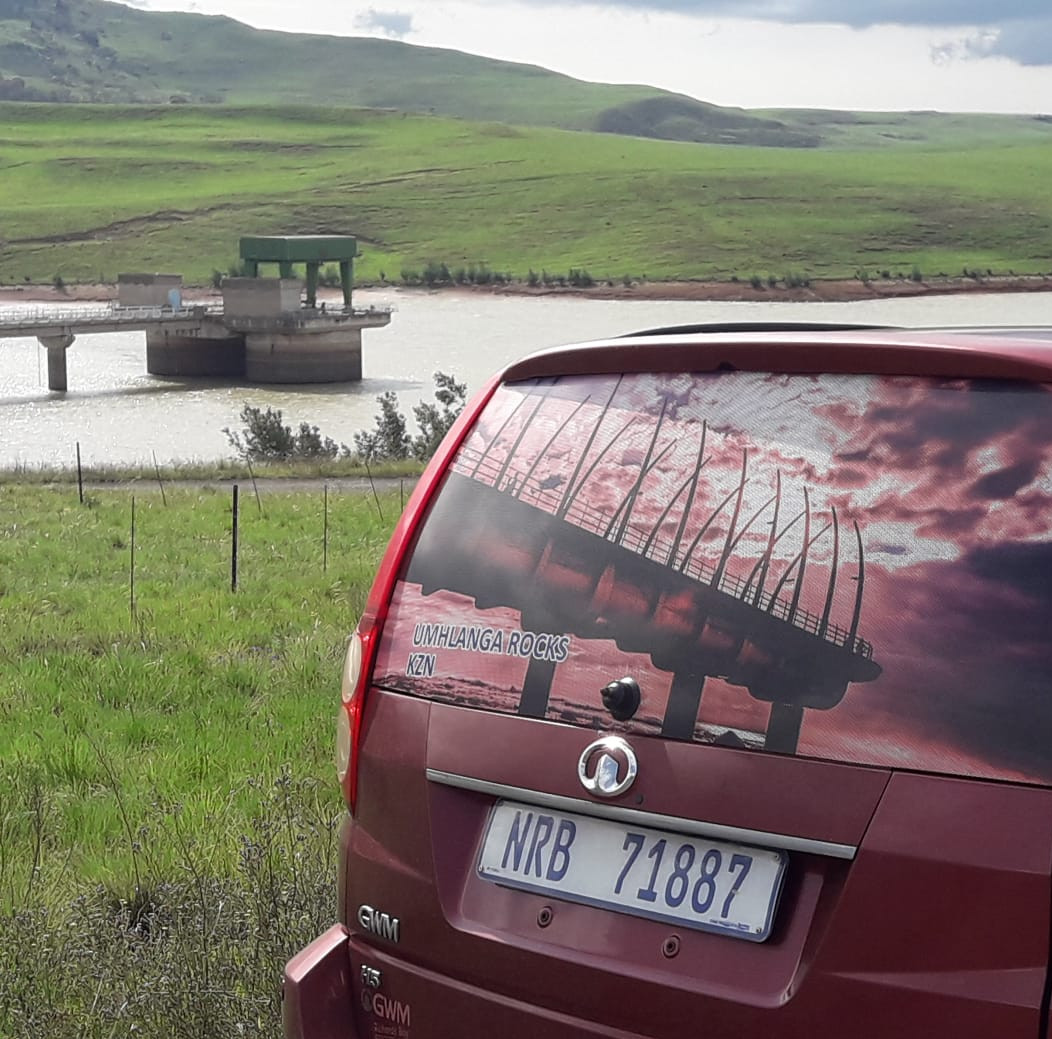 What do you do if you have a soft spot for Umhlanga Rocks and its famous pier?  Mention it to a few friends, maybe. Share a picture or two on social media, perhaps… Well if your name’s Jonathan Syster, a regular visitor to the seaside fun spot, then you go the extra mile to spread the word: 3524 miles or 5672 kilometers to be precise.

Syster has just returned from an epic cross-country road trip with a dramatic picture of the pier filling the rear windscreen of his SUV.

Accompanying the picture was the message “Umhlanga Rocks KZN”.

The 49-year-old Transnet Freight Rail manager set off from his Richards Bay home with his wife Sharon on 27 December, bound for Port Nolloth, where they spent the New Year.

Those who have been there, or who were paying attention in Geography class, will recall that Port Nolloth is on a similar latitude to Durban, but on the country’s Atlantic coast.

Quite a trek, by any reckoning. And to add to the journey, the couple took in great swathes of the Northern and the Western Cape too.

They finally made it back home at 2am on Friday, 10 January, via Plettenberg Bay and Port Elizabeth.

Often along the way, the Umhlanga picture and even his car’s NRB, Richards Bay registration number prompted questions from strangers.

“People did not recognise the car’s number plate. They would ask, ‘Are you from Nairobi?’

“They would come and ask me, ‘Where is this Umhlanga? What is that, those things that look like elephant tusks?,” said Syster, referring to the pier’s distinctive whale bone superstructure.

In an underground parking lot in Kimberley, for example, a car guard wanted to know more: Where is Umhlanga and this beautiful pier?

And what, you might ask, possessed Syster to turn his car into a mobile billboard promoting the FunShine Coast?

He told Umhlanga Tourism that he comes to Durban with Sharon and their grownup sons for weekends every quarter.

It’s a break for the family, but the main reason was so he could attend tuition and tests at Mancosa, a private college.

Syster, whose job involves compiling statistics on rail network efficiency, is doing a Masters degree In Business Administration. His topic: “the effects of inaccurate data capture on productivity on the coal channel”.

With such weighty fare on his mind and after two days in the classroom, Syster understandably needs to unwind a little before driving back to Richards Bay.

A stopoff in Umhlanga for a stroll along the pier and to the lighthouse has proven to be the tonic.

“That Umhlanga pier is always a magnet attracting you… As you walk along the pier, the fresh air, you can direct your thoughts to something else. Just to relax, just to bring back the balance,” he said.

And with the walkabout out the way, the family “always fill up at Burger King”, he said.

Syster hails from Saldanha Bay in the Western Cape and now lives in another port town, but said he had yet to come across anything like Umhlanga’s pier.

He figured the same goes for most people on the West Coast.

Many West Coast and Northern Cape people return to the region for the Christmas holidays from jobs elsewhere in the country. Syster thought it might be fun to share with them a little bit about his adopted province.

He said people in the Cape frequently conflated Durban and Richards Bay; had seldom heard of Umhlanga or were unsure of its location; and were unaware of its prize-winning pier.

And so was born a plan for a pier picture to adorn his car.

He contacted Umhlanga Tourism officer Sabelo Didi for help and a picture and an official nod of approval were forthcoming.

Next, Shana Signs of Richards Bay produced an image of the pier in Contra Vision film and applied it to the rear window of Syster’s GWM H5 vehicle.

Syster said his wife had some reservations, but went along with the plan as the film was see-through from the inside, so does not hamper driving.

The tolerant Mrs Syster also accepted that although she too was on leave from work, the road trip would be no normal holiday. With ground to cover there would be little time for long lie-ins in the morning.

“It was hectic,” he said of thousands of kilometers of driving. On top of that, Syster has been running his own personal Pray for Rain project since the Western Cape drought of 2018. So the road trip included visits to a number of dams where water levels were low.

Here Syster gave thanks or prayed for divine intervention and said God answered his prayers. He mentioned visits to Sterkfontein Dam near Harrismith and Kimberley’s Kamfers Dam.

He also told how he had been discouraged by police from visiting the Rustfontein Dam, near Botshabelo in the Free State, because it was late and they felt it unsafe.

But said he was able to stop on the roadside on the way to the dam and pray from a prepared text after spotting the lights of a traffic police car, parked in an unlikely location, that was pointing to the turnoff.

Apart from the prayer mission, the couple used their journey to take in some out-of-the-way beauty spots and Syster made special mention of the storied settlement and hot spring resort of Riemvasmaak near the border with Namibia – “it’s a wonderful place man!”

He also paid a flying, 9pm visit to Wupperthal, the historic Cedarburg town devastated by fire in December 2018. From the famous factory there he picked up two pairs of veldskoene (the traditional South African walking shoes now in international vogue) that he had promised his sons.

After some time in Kimberley, Aggeneys, Nabapiep and Port Nolloth, and a couple of days visiting family and friends in Saldanha – as well as stopovers at, in no particular order, Garies, Kamieskroon, Clanwilliam and Griekwastad – it was time for the long haul home.

The Syster’s will be celebrating their 25th wedding anniversary on 1 September and the couple spent a few nights in Plettenberg Bay trying out guesthouses ahead of the day.

The plan is to return to Bliss on the Bay in Plett in nine months’ time with five other couples to mark the occasion.

“My trip was like a biryani pot. But I really enjoyed it,” said Syster.

Any final thoughts on that pier picture and the place where it’s found?

Syster notes that cities like Durban and Cape Town have their special places, but often visitors were unaware of them. The pier and Umhlanga were good examples.

And if train man Syster’s ship ever comes in he said he knows the pretty place where he will settle.

“If I am fortunate enough I will get my own R30m mansion in Umhlanga,” he quipped.