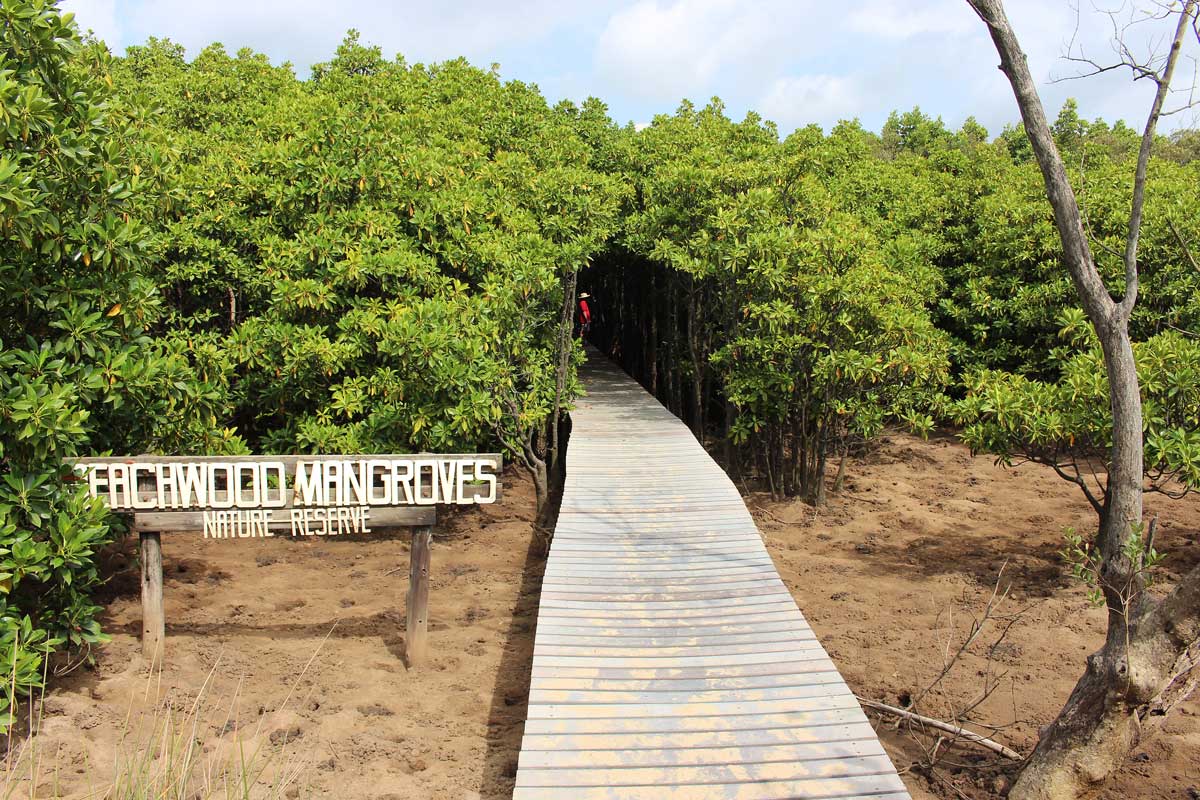 Talk about the survival of the fittest. If you need a neat reminder of how competition shapes our natural world, take a tour of Durban’s Beachwood Mangroves. Assuming it’s low tide at the reserve, at the mouth of the Mgeni River, expect to witness pitched battles among its red clawed mangrove crabs (Neosarmatium meinerti).

Out of their muddy burrows the crabs pour by the score, a blitzkrieg of sideways marching soldiers.

Adults (perhaps the size of a man’s hand) and juveniles scuttle and skirmish.

It’s the art of war in miniature, with offensives, defensives, frontal attacks… the pincer movement.

Sun Tzu and Clausewitz would doubtlessly have been impressed by the manoeuvring, if less so by the victors’ spoils.

The crabs were scrapping for bright yellow leaves.

Siphiwe Rakgabale, our guide, kicks off the crab combat, by chucking down a few.

“The guys clean. There are hardly any (fallen) leaves,” he says of the muddy ground beneath the trees.

Earlier, before we set out on our nearly two-hour tour of the reserve, he directed us to gather yellow leaves from a grove of black mangrove trees (Bruguiera gymnorhiza) near the parking lot.

Now its show-and-tell-time and we followed his example, tossing down our leaves.

Hair-trigger sensitive to vibrations from falling objects, the crabs race out to claim a prize or snatch one from a rival. Then they scuttle back to their holes for a solitary breakfast or early lunch.

Rakgabale explains that black mangroves and red clawed crabs rub along rather well.

The trees drop leaves to rid themselves of salt and in so doing feed the crabs. In return the crabs aerate the soil with their burrows, allowing oxygen to reach the trees’ roots.

This helps the trees grow straight and tall – up to 18-metres high, he says.

It’s part of a bigger picture.

The 76-hectare reserve – bordered by the Mgeni in the south, Beachwood golf course in the north, and the sea and M4 highway to the east and west – provides a refuge for an important ecosystem.

Here, sea, river and land life – plants and animals – combine in rich variety, adapting to the mix of fresh and salty water.

And thanks to the reserve’s paths and boardwalks, you can take it all in without getting your feet wet.

We leave the red clawed crabs under their canopy of black mangroves for a bit, passing a place where rare tangoman crabs (Cardisoma Carnifex) have been recorded.

The boardwalk takes us to one of the reserve’s main waterways.

Rakgabale tells us it’s an important nursery for a variety of sea and estuary fish.

Below us, where mud meets water, Rakgabale points out a mudskipper (Periophthalmus kalolo).

Soon we spot more of the muddy-coloured amphibious fish, each perhaps the length of a finger.

They have fins that double as legs, helping the little fish to skip over the mud as they chase flies and mosquitoes.

Mudskippers have curious mating and young rearing habits, but Rakgabale does not go into this; we were really on the lookout for crabs, fiddler crabs (Uca annulipes, Uca chloropthalmus, Uca hesperiae, Uca inversa, Uca urvillei) in particular.

Sure enough, on the same stretch as the mudskippers, we find them.

The little fellows (about 3-centimetres across their backs) are living proof that when it comes to males, certainly of this species, size matters.

Fiddler males, we learn, are famous for having a single, hugely oversized claw – relative to its other, minor claw, or to female claws, for that matter.

Crab experts reckon fiddlers use their major claw to pique the interest of prospective mates during courtship.

“They wave to try to attract females. That’s what they always do. Maybe they want to have coffee,” quips Rakgabale.

Fun crab fact: if a crab loses a limb or claw it gets a new one when it moults. Little scope for prosthetists in crustacean country, then.

But enough of crabs.

We pause to lick the salt, excreted from the back of a mangrove tree leaf before Rakgabale lead us down another boardwalk, towards the sea.

He points out red mangrove trees (Rhizophora mucronata) and explains how you can tell them apart from the black species.

The root systems differ considerably, as do the leaves.

The seeds or fruit, when in season, are another give-away.

Rakgabale showed us the cigar shaped fruit peculiar to the black mangrove.

These are wonderfully adapted to fall straight down and plant themselves in the mud when the time is ripe.

These have different aerial or “pencil” roots that poke up from the ground, some 20-30-centimetres. The trees grow up to 12-metres high.

Our guide speaks enthusiastically about how the mangrove trees play an important role in dissipating the sea’s energy, protecting life and human structures from storms and tides.

They check the spread of moist sea air that rusts our possession; in some parts of the world they ease the impact of tsunamis, Rakgabale says.

We stop to examine some tree climbing whelks (Cerithidea decollata).

The presence of the little snails provide a useful way of monitoring the health of the mangroves. And depending on how high up a tree you find them, warn of floods, he says.

At the end of a boardwalk we crest a small dune, emerging above the beach to some fine views.

To the north, through the summer haze, you can make out the high-rise flats of Umhlanga, in the opposite direction is the Durban harbour entrance, the Bluff and the city centre.

Rakgabale reckons with its soaring arch the World Cup stadium looks like a giant picnic basket or, more fantastically, the jaws of a shark fully distended to swallow some hapless prey.

Beyond the stadium lies Morningside and the Berea and on our side of the river, Durban North and the Hypermarket.

A less appealing sight lies almost at our feet, a big pile of bagged litter.

It must have carried down the river and washed up on the beach.

But the good news is that the litter is being collected for disposal and recycling.

Rakgabale, who does work for the Green Corridors and the Green Hub, an environmental initiative based on the southern side of the river mouth, tells us he coordinates a project that fashions pollution booms from rope and shade cloth, with 2-litre plastic bottles doing duty as floats.

These are stretched across waterways in the mangroves and at various tributaries entering the Mgeni rivermouth, to catch plastic and other litter.

On the third Saturday of every month the reserve holds an open day when volunteers help with beach cleanups, adding-to anti pollution efforts by the municipality, the Expanded Public Works Programme and other initiatives. # Keep Blue Lagoon Clean

Its honorary officers, including a number of specialists in their own right, do duty on open days, showing visitors around the reserve.

They also man stalls, hand out leaflets on various conservation topics, sell indigenous plants for the reserve’s funds and take visitors through its display centre.

Aside from third Saturdays, tourists, schools and other groups can arrange visits to the reserve at other times by appointment.

Call Basil Pather, conservation manager for the Beachwood and Umhlanga nature reserves, at 082 559 2839.

Siphiwe Rakgabale, an officially registered Culture & Nature, level 4 guide, and has been leading tours at the mangroves for a number of years. Contact him at +27 (0)78 726 4890.