Roll with it baby!
Club will bowl you over

January 27, 2020 | Umhlanga Tourism | Comments Off on Roll with it baby!
Club will bowl you over 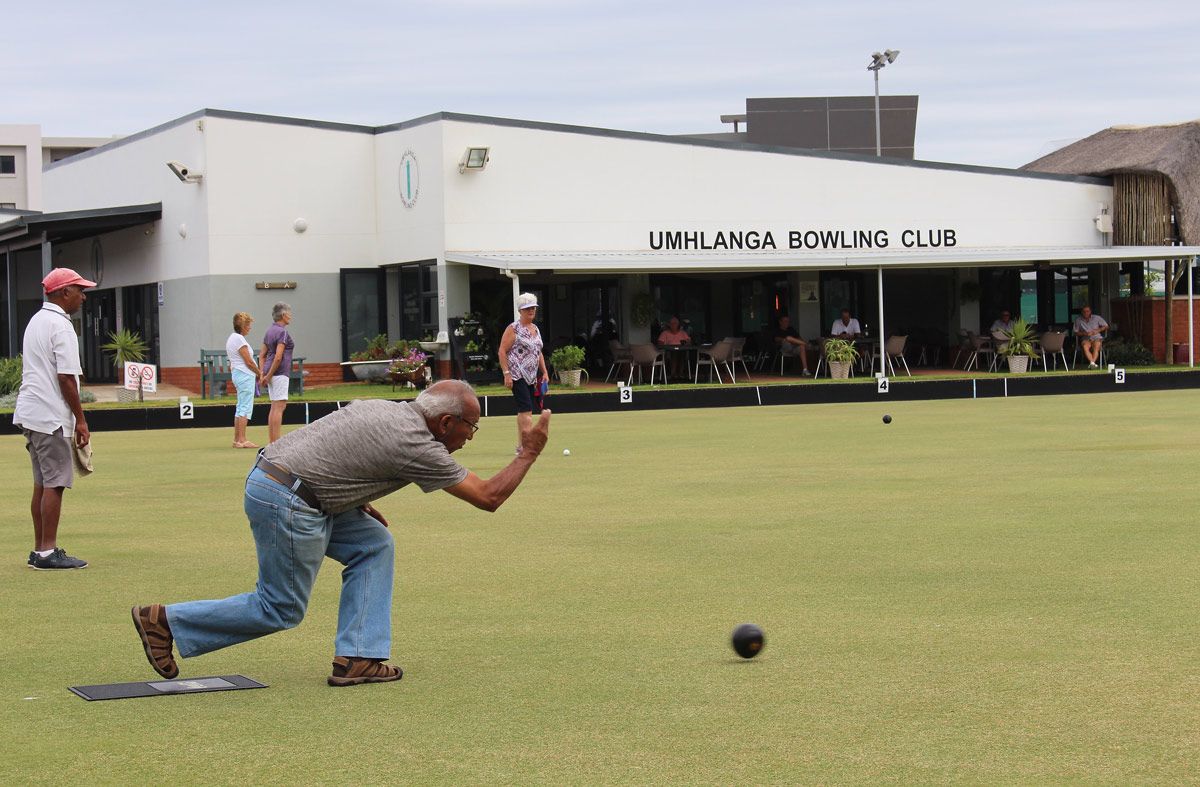 A heresy to say it here perhaps, but Umhlanga’s beaches aren’t for everyone. And even ardent holidaymakers sometimes tire of the seaside and seek alternatives. Chris Carter reckons the answer lies at the local lawn bowls club.

Carter, coach of the Umhlanga Bowling Club, says the sport offers a winning way to hone your physical, psychological and motor skills in a fun, sociable setting.

He says that the club, established in 1965, has always been welcoming to visitors and tourists.

Some may dismiss bowls as “old man’s marbles”, but Carter says the reality is rather different.

In one team at the 2018 Commonwealth Games, in Gold Coast, Australia, the average age of the bowlers was 23. And the youngest bowler at the games was 15, he says.

Umhlanga is part of the Port Natal Bowls district, which has U18 and U15 squads training for the nationals.

And at the club itself, the average age of members (120 bowlers and 20 social) is coming down, says Carter.

When your correspondent called at its Twilight Drive, Prestondale, grounds last week (23 January), a lively crowd was starting to trickle in for social games of mixed trips

It would be a stretch to describe the men and women on the green as being in the first bloom of youth, but they were hardly over the hill either.

Among their number were a liberal sprinkling of ski-boat fishermen.

Strange bedfellows you might say, but the bowls club shares its grounds with the Umhlanga Ski Boat Club (which has its own club house) and the Umhlanga Tennis Club (four courts, two of which are floodlit).

There’s a pleasing view from the bowlers’ clubhouse over two greens. And Carter says many of the anglers come across to enjoy it over a convivial drink.

While there, some mix their drinking with a spot of bowls… or is it the other way round?

The fortuitous arrangement dates back to August 2016, when Umhlanga’s anglers and bowlers quit their old clubhouses and greens on council-owned land, on Lagoon Drive.

Together they moved up the hill to Prestondale, on the edge of Umhlanga’s expanding business district.

The multibillion rand residential flats and shopping mall development had been scheduled for completion in June 2020, but has been dogged by delays.

The bowls club, however, is “very happy” with the deal they got.

“Our clubhouse is the best in the district and our greens are running very well,” says Carter.

The new facilities represent an investment of R20 million by the Oceans Umhlanga developers and the municipality.

The bowls club’s old site, near the beachfront, did draw plenty of visitors over the years, he said. Happily, many of those people remain friends, coming to play during holidays.

Keeping with the informal seaside vibe, as with all bowls clubs these days, casual clothes are acceptable, except for club, district and national competitions.

Your correspondent had come from a work meeting, so trousers were rolled up and veldskoene kicked off – “bare feet are very acceptable”.

Heeled shoes are verboten, though. They damage the greens, which each cost in excess of R1 million to establish.

Carter is a friendly, enthusiastic coach and we are soon going through the basics, beginning with the bowls themselves.

To the sport’s adherents what follows will be old hat, but newcomers may be surprised to learn bowls are far from being perfectly round spheres.

They are somewhat flattened at opposite ends and by varying amounts. This causes the bowl to roll away to the left or right, depending on how it is held or “delivered”.

The bowler must compensate for this “bias”, as it is known.

Carter says this variable gives the game much of its flavour. It would be “boring” if the bowls simply rolled straight.

Apart from up to six different degrees of bias, depending on the make, bowls come in nine sizes. The idea is to find one that fits your hand comfortably.

Then it’s about down to planting your leading foot on a small rubber mat and stepping forward into a crouch.

While this is happening, the arm swings down pendulum fashion, releasing the bowl in a fluid, unforced motion.

Easier said than done, of course. And thinking about it too much doesn’t help.

Inevitably, comparisons must be drawn with golf.

Both games are fundamentally simple.

But the devil’s in the details.

Posture, grip, orientation of the body and a bunch of other things must be right if you are to deliver consistently to a precise point.

Let’s make no mention of wind and green conditions here, but record that your correspondent was sadly all over the place.

It was fun trying though.

The bowls club often hosts birthdays, team-building and corporate events. At these Carter frequently helps guests get to grips with the sport.

When the Sharks paid a visit last year for team building, Carter was impressed at how place-kicker, Curwin Bosch took to the game.

Kicking a ball over the posts is all about little routines, position, timing and follow-through. So it’s perhaps easy to see why the Super rugby fullback-flyhalf shone on the green.

That Bosch’s grandfather happened to be a bowler, can’t have hurt.

Rugby players at this level are professional athletes and typically thrive on competition of any sort. But Ralepelle handled the bowl like a shot put – and a featherweight one at that.

The Springbok front-rower was soon apologizing politely for the damage he was doing to the green.

Regardless of your strength or talent – inherited or otherwise – Carter reckons bowls is for everyone.

“We’ll make a bowler of you yet,” he even assured this duffer.

Once the basics are acquired, it’s time to play with other bowlers, in singles, doubles, trips or fours combinations.

This brings a whole lot of tactics into the reckoning plus the fun of playing a team sport.

It’s beyond the scope of this report to go further into the rules and mechanics of the sport. But if you are keen to have a go, or perhaps take a break from that beach holiday, call the Umhlanga Bowling Club at 061 644 9438.

All are welcome to join games at the bowls club on Tuesdays, Thursdays or Saturdays, with social and sponsored competitions including prizes during the month.

Now read: Feeling energetic… join the parkrun on the promenade