Outdoor gym muscles in on flab

February 18, 2020 | Umhlanga Tourism | Comments Off on Outdoor gym muscles in on flab 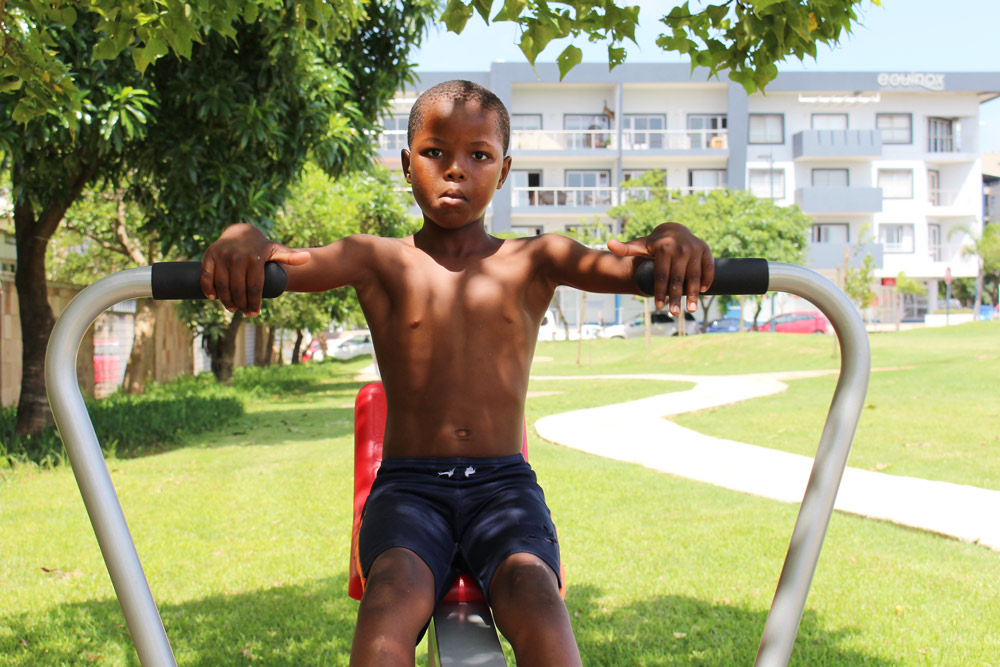 Unless you’re on the right side of 25 or genetically blessed, you won’t get that trim Umhlanga beach body lounging on the sofa scoffing pizza and binge watching miniseries. There’s a price to pay for everything.

But the good news for residents and visitors to the FunShine Coast is that it has recently got easier, or certainly cheaper, to tone flabby figures.

Contractors have installed 12 rugged exercise machines, some able to accommodate four or more people at a time, at a site near the firestation.

The idea, presumably, is to encourage residents to trickle out of their trendy flats in the expanding Ridge and Town Centre precincts and visit the gym in its attractively landscaped park.

And because the facility is free to the public, there’s every reason for guests from Umhlanga Ridge and Town Centre hotels to use it too.

Heck, if you were even a little bit fit it should be a doddle to jog up from one of the seaside hotels. Then, after a brisk workout, dash back to the beach for a dip and a shower.

Your correspondent isn’t quite in the high performance, lycra-clad league so arrived by car, kids in tow.

The association has planted fast-growing trees near many of the machines and in a few years’ there should be shade aplenty to shelter gym bunnies as they work up a lather.

But it was a blistering late morning in mid February, with the mercury nudging 30C when we visited.

Some bigger, established trees were growing on the perimeter and we sat beneath one on the lawn to consider our best line of attack.

And very pleasant and peaceful it was too, save for a passing motorcade at one point: A minister or some worthy raced up Centenary Boulevard with his entourage in black SUVs, blue lights flashing and motorbikes revving, no doubt en route to the airport or a ribbon-cutting.

The exercise machines have been arranged circuit fashion and linked by a wide concrete path.

The fast and the furious probably run from one machine to the next, wrapping up their workout lickety-split before heading off to own the day or to do whatever highly effective people do.

But we took a leisurely stroll around the about one-acre park, inspecting the  apparatuses with trained journalistic detachment.

It was about then we came upon Lucas Reardon and his six-year-old daughter, Bryn Reardon.

(Mrs Reardon, we learnt, was nearby, refusing to leave the family’s air-conditioned car.)

The Reardons live in Redhill, a few kilometres to the southwest, but had previously stayed in Manhattan Mews, in what passes for low-cost housing in upmarket Umhlanga, according to Reardon Snr.

They had come to the outdoor gym that morning for an outing and collected a few young friends from the old neighbourhood along the way.

We soon press-ganged the kids into playing photographic models and they tried out some of the machines while smiling for the camera.

Affixed to many of the machines were instructions on how to use them; recommended number of repetitions for differing levels of fitness; and a description of the muscle groups targeted.

There were even QR-type barcodes, which you can apparently scan with a smartphone to view an online tutorial.

Less of a confidence-booster are the health warnings on the plaques: “If you feel dizzy, nauseous or otherwise ill, please discontinue use and consult your doctor for exercise guidelines before continuing. If you are under a doctor’s care, please use the equipment per the doctor’s guidelines for intensity and duration.”

These are probably a symptom of our increasingly litigious society or perhaps creeping nanny statism.

In your correspondent’s admittedly limited experience, a degree of nausea is par for the course with any kind of serious exertion.

In any case, some queasiness is of no consequence compared with the self loathing that comes with spying one’s own flabby form in the mirror.

So we threw caution to the wind and tried out the chest press machine, designed according to the plaque to build upper body strength.

Well, who doesn’t want to swap the old sunken chest for real treasure: pecs of steel?

Waves of nausea did not exactly overwhelm, but that old bodybuilding motto did spring to mind: no pain no gain.

Some of the other machines were a little more gentle.

The waist twister, for example, involved standing on a pivoting disc. It seemed more about improving flexibility or simply having fun.

But let there be no discussion of the pull-up bars here. This is a get-fit device at once utterly simple and diabolically energy-sapping.

It was about at this point, that our little group decided to throw in the towel.

We joined Ish Samaroo, who had set out a few deckchairs under a tree on the perimeter.

He was passing the morning at the “fantastic” outdoor gym with his granddaughters, Dhivera (9) and Kaerah (7) Govender.

Samaroo, a resident of Avoca, also a few kilometres southwest of Umhlanga, remarked that none of the “lahnees” living nearby seemed to be using the gym that morning. They were missing out.

He speculated the high prices charged by some private gyms encouraged members to overtrain to get their money’s worth.

“I have seen people have heart attacks,” said Samaroo, mentioning a certain private fitness chain, “There you are pushed for time.”

We congratulated ourselves on our more sensible approach to exercise, as we stretched back in our chairs.

Justin Newcombe-Bond, landscape and irrigation manager for the Ridge Management Associations, said the gym had generally been well used.

“Mainly residents… However guests from the local hotels also make use of the gym,” he said.

It had been built at the request of Umhlanga Ridge Town Centre Management members, who had funded the project.

The response from the public had been entirely positive since installation work began in September last year, he said.

Newcombe-Bond confirmed it was open to the public.

Although there were no particular rules, “good manners are preferred and wiping down the equipment after use is appreciated”.