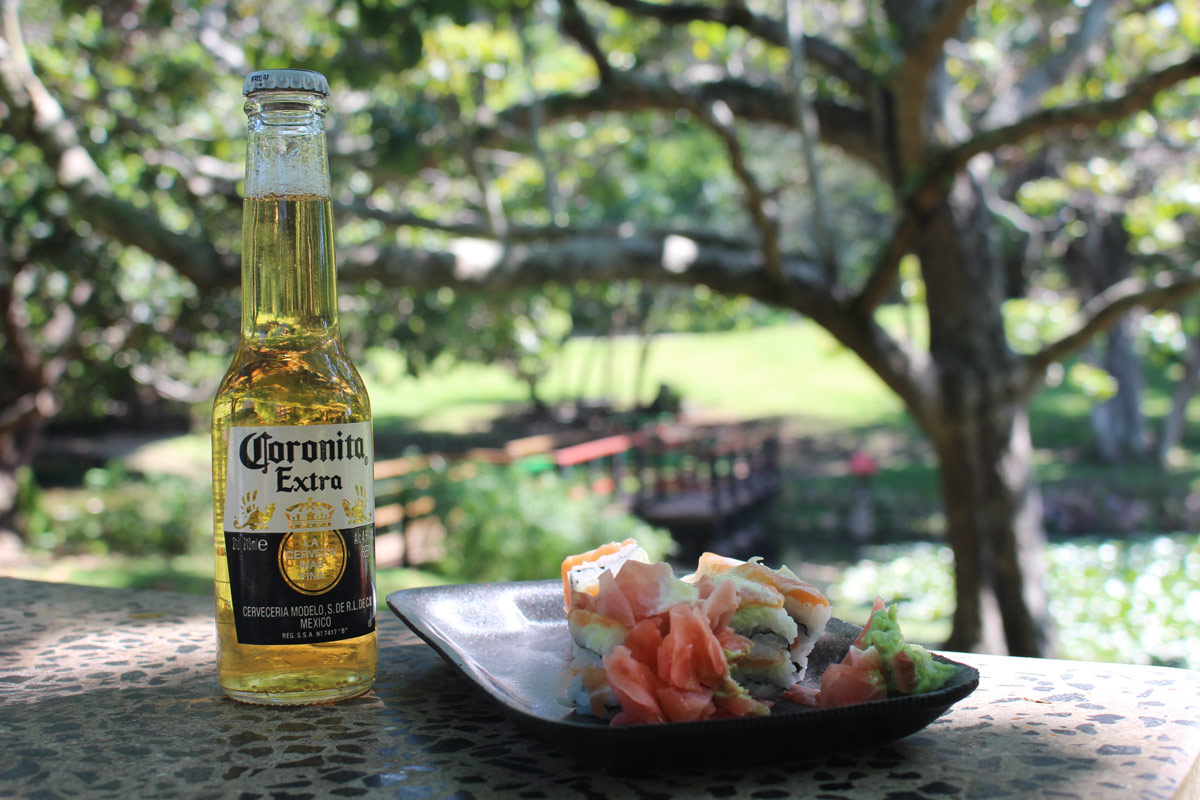 Ah, the quiet pleasures of a walk in the park. And so it was last week, on the eve of lockdown, as opportunities for public recreation began to disappear like so many rolls of twin-ply from the supermarket shelf, I returned to the Japanese Gardens.

As returns go, it was not one of those nostalgic ones.

In my mind’s eye, I believe I can see its concrete lanterns and little red-and-black wooden bridges. Or maybe I remember those details only from pictures.

At any rate, the eThekwini Municipality has put a great deal of effort and, according to some reports, R5.5 million, into sprucing up the gardens, which had lost some of its charm.

In search of lost time

I wanted to see it again.

I  would take photographs and make notes.

Then, “publish its meanness to the world; or if it were sublime, to know it by experience, and be able to give a true account”.

Borrowing here from Thoreau, I would go to the gardens “to live deep and suck out all the marrow of life, to live so sturdily and Spartan-like as to put to rout all that was not life… and reduce it to its lowest terms…”

Or, so far as you can do this in a suburban park with a couple hours to spare.

It was approaching lunchtime and, recalling that even Spartan armies marched on their bellies, I made my way first to the Sun Sun Fresh Market.

Durban North has a Chinese community and the Sun Sun, on 63 Umhlanga Rocks Drive, is its local grocer.

It might not be your purist’s idea of where to provision a picnic in a Japanese garden, but any port in a storm.

And while it’s true the Western mind tends to conflate much from the Far East, it was getting plenty of help from the little Chinese supermarket.

It carries a selection of foodstuffs from a variety of Asian countries, including Japan and Korea.

There was also crockery, cutlery, kitchen consumables and much more.

I spent a long time wandering the aisles, gawking at the exotic wares and getting in the way of shoppers and staff in face-masks.

Somehow, nothing really grabbed me.

I like my Chinese food set down before me, steaming in a bowl – Menu B normally at my local. But that’s a story for another time.

I felt bad about leaving the Sun Sun empty handed, so spying a shop worker packing shelves, I hailed him with one of those elaborate salutations familiar to all travellers who have spent time in the East.

The East Coast of South Africa, that is.

“Sawubona, Baba,” I said, bowing my head slightly in the Oriental manner and holding out a bottle of Lee Kum Kee brand soya sauce for him to inspect, “Malini, is this one the cheapest?”

With a barcode scanner, he confirmed that indeed it was. I left, R36 well spent.

Next door to the supermarket – you can use an adjoining door, too – is the Sun Sun Chinese Restaurant.

It was a little early and the kitchen had yet to open. But the chef who was outside killing time – “no customers”, he shrugged – was happy to bend the rules.

In the time-honoured fashion of travellers abroad faced by language barriers, I pointed out a photograph on the plastic laminated menu by the counter.

The chef nodded, went behind the counter and set to work.

Chop-chop, I had something quite different to what I thought I had ordered.

Packed and ready to go, it was twice the price I had budgeted for.

It was an honest misunderstanding. And as they say in Hubei province, what the heck!

I took my takeaway with thanks and left.

Durban North’s Japanese Gardens are easy to find in my old map book, but somehow I followed a circuitous route getting there.

I drove all the way down to the Umgeni River, past the Riverside Soofie Mosque.

On the corner of Soofie Saheb Drive and Riverside Road, a man in a dark kurta and skullcap was hawking face-masks.

I rolled down my window to hail to the fellow.

KwaZulu-Natal’s tourism and environmental affairs minister has come out strong on price gouging of late. She has paid surprise visits to butchers and supermarkets with promises of action as tinned pilchard prices inflate and soap suddenly costs more.

Should I, like some Mao-era little general, report the man?

The indomitable human spirit, the ability to earn a living in the most trying of times, has to be admired. And what should you pay for a face-mask anyway?

I doubled back and was soon at the Japanese Gardens, at 6 Prospect Hall Road.

The plan, in the best traditions of Theodore “Teddy” Roosevelt (like Thoreau, another sturdy Yankee) was to speak softly and carry a big stick.

Apart from my takeaway picnic, I had packed a pick handle.

One or two muggings were reported at the gardens a couple of years ago and I had no intention of parting company with my camera.

But I needn’t have worried.

A security guard was on duty, keeping an eye on things and a handful of friendly souls were out and about, enjoying the bright, early autumn weather.

The aesthetics of gardens, the Japanese variety especially, is a vast subject and well beyond the ken of your correspondent.

Still, it was easy to appreciate all the greenery.

Lots of tall trees, including conifers and yellowwood, gave the gardens a hard to explain, vaguely Far Eastern feel.

I left the parking area, sans stick, in search of a spot to eat.

Lie of the land

Homes border it on two sides and to the east, the Ruth First M4 Highway and a strip of coastal forest separates it from the sea.

The Japanese Gardens span a small valley, with a series of ponds at its bottom.

I found a big polished concrete picnic table and benches near the highest pond and sat down to examine my takeaway.

It came with a little tub of soy sauce for dipping, a paper napkin and bamboo chopsticks, sealed in plastic.

But I was in such a hurry to eat that I only discovered the chopsticks in the bottom of the takeaway bag later, when my hands were sticky.

But what a feast.

The delicate pink salmon and the delicious rice rolls were soon gone, chased down by hot dollops of wasabi.

The Japanese horseradish paste gave the sinuses a working out and I felt almost cleansed and certainly satisfied.

Above the pond, on a wide bridge, a young couple were enjoying the play of light on water, the lilies and the ducks.

A stand of giant bamboo shifted on the hint of a breeze.

Down in the valley, in this little subtropical refuge, you could be at once anywhere and everywhere – far away and close to home.

Beyond the gardens the world was going to hell in a handcart. But here, in the moment, all was well.

As Thoreau reminds us: It’s not what you look at that matters, it’s what you see.

Now read… Some sanity in a humpty-dumpty world