May 25, 2020 | Umhlanga Tourism | Comments Off on Beautiful game:
Umhlanga’s Sabelo in winning team 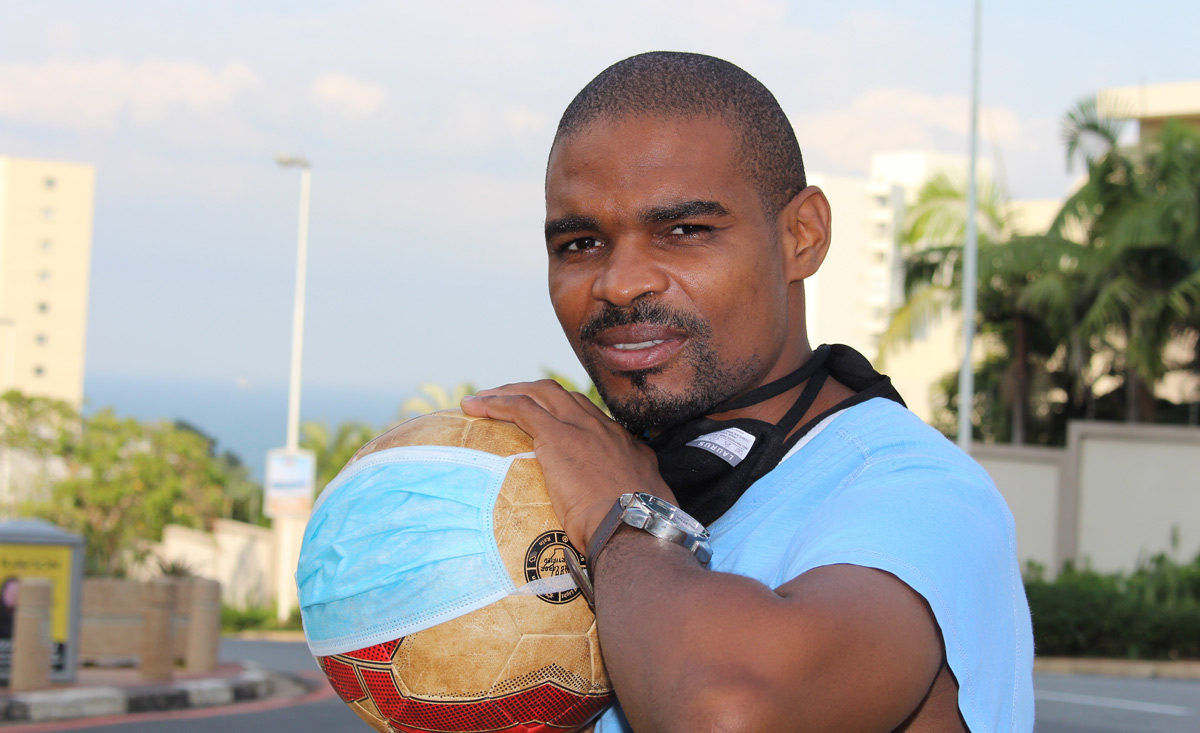 To thousands of visitors he’s the friendly, unassuming chap behind the information desk. And to many B&B owners and other operators, he’s the helpful voice at the end of the phone line.

But few perhaps realise that Umhlanga Tourism’s Sabelo Didi also does a lot of good work in a completely different ball game.

The membership consultant devotes much of his spare time to youth development.

He established a football club with that in mind two years ago. And it soon emerged as a shining light in Sabelo’s home township of Lindelani.

In its first season, in 2018, the Lindelani United FC U15 team won the local league, as well as its top-8 knockout competition.

The word spread and last year the club expanded and now also fields U11, U13 and U17 teams.

How did it all start?

About six or seven years ago Sabelo began organising five-a-side soccer matches to give Lindelani kids something productive to do in the school holidays.

It went so well that a few of the boys asked him if he could form a team to compete in the Ntuzuma Local Football Association league.

And so the club was born, which today counts 77 “very committed” players and four volunteer coaches.

Some of the players come from poor homes, said Sabelo, including a 15-year-old who lives alone in a township RDP house, with only a little money sent by a mother to keep him going.

The boys practice three days a week, with matches on Saturdays and on Sundays for the U17s.

The club has garnered something of a local following.

It doesn’t hurt, said Sabelo, that free wi-fi was available at the grounds where they played, courtesy of the eThekwini municipality.

Spectators could make a day of it – enjoy a feast of football and that must-have for Millennials, free phone data.

Also on the subject of marketing, Lindelani United FC have been canny in publicising their achievements on Facebook.

This attracted the attention of the Pretoria-based kit makers, Best Team, who now provide the club with soccer shirts, shorts and socks.

Success breeds success and it has all worked a charm in helping to keep the youngsters out of mischief.

Sabelo reckons that between his club work and fatherly duties to his six-year-old daughter Ayanda he too hasn’t time to stray at weekends.

“It keeps me busy… I’m also vulnerable,” said the 34-year-old, without a hint of irony, “So I am still fresh and cool on Monday to do my tourism work.”

We asked Sabeolo what prompted him to devote so much of his spare time and energy to young people and soccer?

He said he grew up playing the game on the streets of Lindelani, a small township some 15 kilometres west of Umhlanga.

Then, as now, there was little else in the way of sport on offer.

Sabelo spent much of his early life kicking the ball around with his mates.

But when he got to high school his parents insisted he give it a break and concentrate on his books.

His dad was anxious Sabelo did not follow in the footsteps of a cousin who had devoted an enormous amount of time and energy to the sport, but wasn’t able to make the professional leagues.

As it was, Sabelo’s own talents on the pitch “weren’t the greatest”. So the young midfielder applied himself to his schoolwork, limiting his soccer to supporting friends.

It proved a wise move.

After school the young man knuckled down some more, completing a Diploma in Tourism by correspondence, through the University of South Africa.

His parents scraped together the money for his first year. Piece work and funding from the National Student Financial Aid Scheme (since repaid) covered his second- and third-year fees.

Four days before the 2010 World Cup kicked off in South Africa, Sabelo scored an in-service trainee job with Umhlanga Tourism.

It was the “perfect time” to start a career in tourism and Didi remembers the excitement of the period well.

“It was hectic. There were flags of all the countries,” he said, recalling the decoration on  Umhlanga Rocks’ Chartwell Drive, which was closed to vehicles during the soccer showpiece.

What drew him into tourism?

Although he grew up in Lindelani, Sabelo’s family hails from Underberg, near the KwaZulu-Natal Drakensberg. On holiday visits there as a lad he was always seeing “people going up and down the mountain”.

“It was called tourism. I decided I needed to be involved in this tourism game,” he said.

Ten years on and Sabelo is very much at the centre of Umhlanga Tourism’s work.

He attends its monthly committee meetings and is up to speed on all its activities, liaising daily with members.

He also goes to trade shows including the World Travel Market Africa, in Cape Town, and Africa’s Travel Indaba, in Durban, where he helps promote the FunShine Coast region.

Over the past few weeks, during lockdown, Sabelo has been at Umhlanga Tourism’s information office. He was assisting accommodation business owners with the papers they need to apply for municipal rates reductions.

Along with colleague Nonhlanhla Shazi, he is very much the public face of the organisation.

The job brings him into contact with a lot of people, including visitors from practically every corner of the globe. Tasmania, Vancouver and Fiji, he offers as examples when quizzed.

Many Umhlanga visitors are regulars and over the years Sabelo has got to know quite a few and struck up friendships.

He mentions a couple from Malmö, Sweden, who holiday in Umhlanga in late February and early March.

Coronavirus put paid to their travels this year, but normally they pop in to say hi and find out what’s new.

“With tourism in this part of KwaZulu-Natal there are always new features, games reserves, always new stuff,” said Sabelo.

It’s a richly blessed region when it comes to the athletic ability of its people too.

“The kids have natural talent,” he said of his young football charges.

But Sabelo added that a lack of discipline and a dearth of coaching remained a stumbling block to the success of South African football.

If there was money, he would like to send his Lindelani United FC coaches for training.

Boots and balls were pricey too, he said.

For more information on tourism or to talk football, contact Sabelo at sabelo@umhlangatourism.co.za .