Dark days call for dose of the good stuff

June 1, 2020 | Umhlanga Tourism | Comments Off on Dark days call for dose of the good stuff 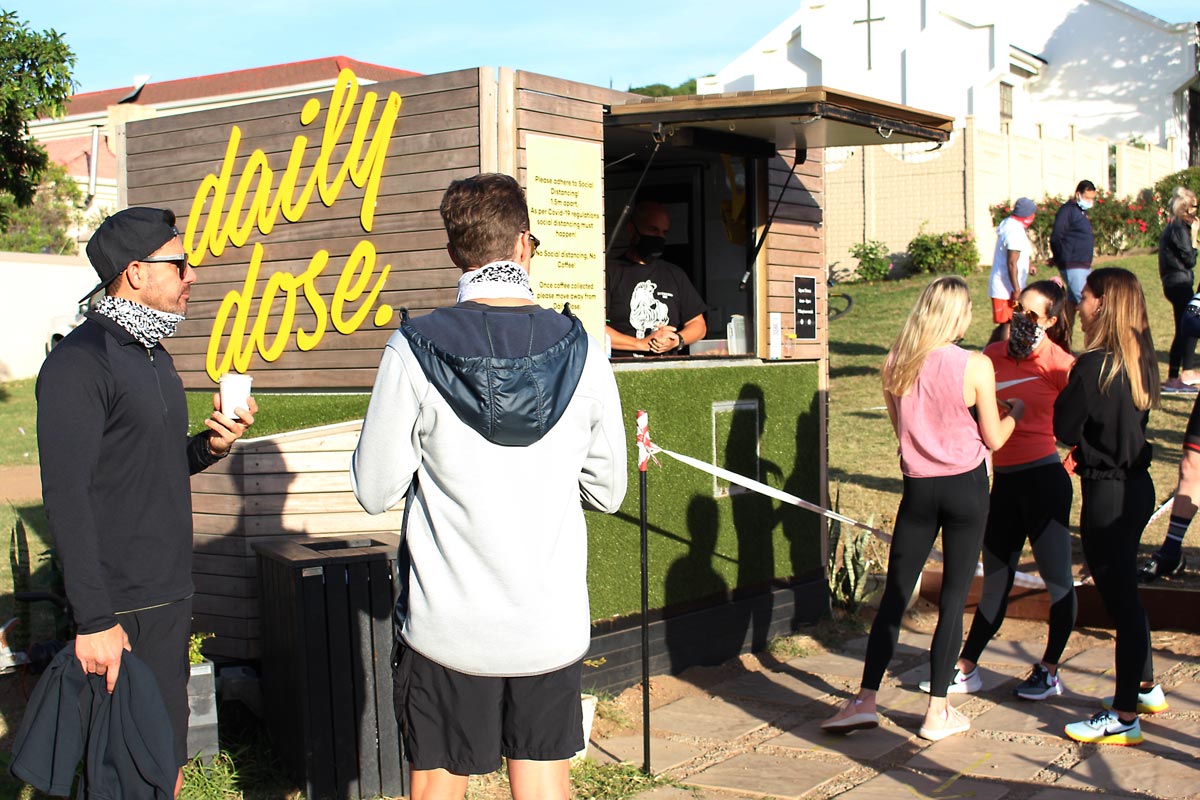 If you ever doubted the addictive powers of a fresh cup of coffee, you probably haven’t seen the line at Daily Dose. We’re talking about the little wood-clad kiosk above Umhlanga’s Durban View Park, which reopened in early May to the considerable approval of its clientele, new and old.

These being lockdown times, the caffeine-lovers were observing a certain distance.

But there was a cheerful, positively social, buzz about when your correspondent called for his fix on a bright Friday last week (29 May).

Runners, dog-walkers and families returning from a morning stroll on the nearby promenade, were shooting the breeze as they waited their turn.

Front of house, Dean Grobler watched the queue, chatting to regulars and greeting many by name. “Morning Martin,” he called out to a man with a tan-coloured Labrador.

From his sunny spot on the lawn, overlooking the ocean, Grobler seemed happy with his lot. “We have the best office in town,” he said.

This was to take advantage of the easing of lockdown rules which lets people exercise whenever they like.

To say restrictions on trade since the 27 March start of South Africa’s coronavirus lockdown have been hard on the local restaurant industry, would be a gross understatement.

But Grobler and Rosa have done more than most to keep the wolf from the door.

Early on, during hard lockdown, they took over a coffee kiosk in the Pick n Pay at Westville Junction shopping centre, on a short lease.

“We had to make a plan,” said Rosa, of the arrangement, which came to a close at the end of May.

“We are not ones to complain – we know of lawyers who are selling face masks to keep going.”

Sales from their regular spot, near the traffic circle at the intersection of Durban View Road and Marine Drive, resumed on 7 May.

Initially, to comply with lockdown rules, business was limited to coffee deliveries by motorbike (tricky and, perhaps, something of a first).

Curbside sales, with orders placed by WhatsApp, followed and, more recently, controlled queuing from 6am to 9am.

It’s been a case of whatever it takes. And clearly customers were grateful to get their hands on a warm brew and to see a few familiar, friendly faces.

One of them, roadrunner Ailsa Moffat, 51, was waiting in line on Friday.

Did she visit Daily Dose daily?

Moffat, who had been preparing for a second attempt at the Comrades Marathon when the pandemic struck, said she does 10-15 kilometres a day.

She goes to Daily Dose for a single-shot latte at the end of her run.

“It is my final destination. This motivates me, my reward. I enjoy it as I walk home,” said the resident of Lagoon Drive, Umhlanga Rock, and Savages running club member.

“They make it specially for me. They make it the way I like it. Within days of coming here they knew my name, my drink. I like a biscuit… they know,” said Moffat.

She said that apart from coffee and the personal service, “people like to support people who are enterprising”.

“These guys found a way to make it work in difficult circumstances.”

Grobler is modest on the subject and down to earth on what makes the business tick.

“It’s not about the coffee; it’s about the experience,” he said.

His team makes it their business to connect with people.

A customer might be “going through a kak day” and might be a little grumpy, but Grobler swears by their unstudied meet-and-greet policy to set things right.

What kind of a skat are you?

It appeared to be a winning recipe.

Gus Warwick, 71, arrived with his Scottie, Makhathini, in tow.

Man and dog had just done their daily walk, from Durban View to the lighthouse and back.

Makhathini always insisted they stop at Daily Dose for one of its pet treats, the semi-retired banker explained.

Warwick, who lives in Marine Drive, picked up his regular, large cappuccino.

“It’s a must. When they closed down at the beginning of lockdown it was a tragedy,” he said.

Tragedy indeed, but it’s an ill wind that blows no good.

As much as lockdown had been bad for the business, Grobler said it had bought them some new clientele.

The Level 4 restrictions, which fall away from today (1 June), limited outdoor exercise to three hours in the morning and to within 5 kilometres from home.

“It forced people to make use of what we had in our backyard – the promenade,” said Grobler.

We’ll all drink (coffee) to that.