Crocodile Creek snaps back into action

June 30, 2020 | Umhlanga Tourism | Comments Off on Crocodile Creek snaps back into action 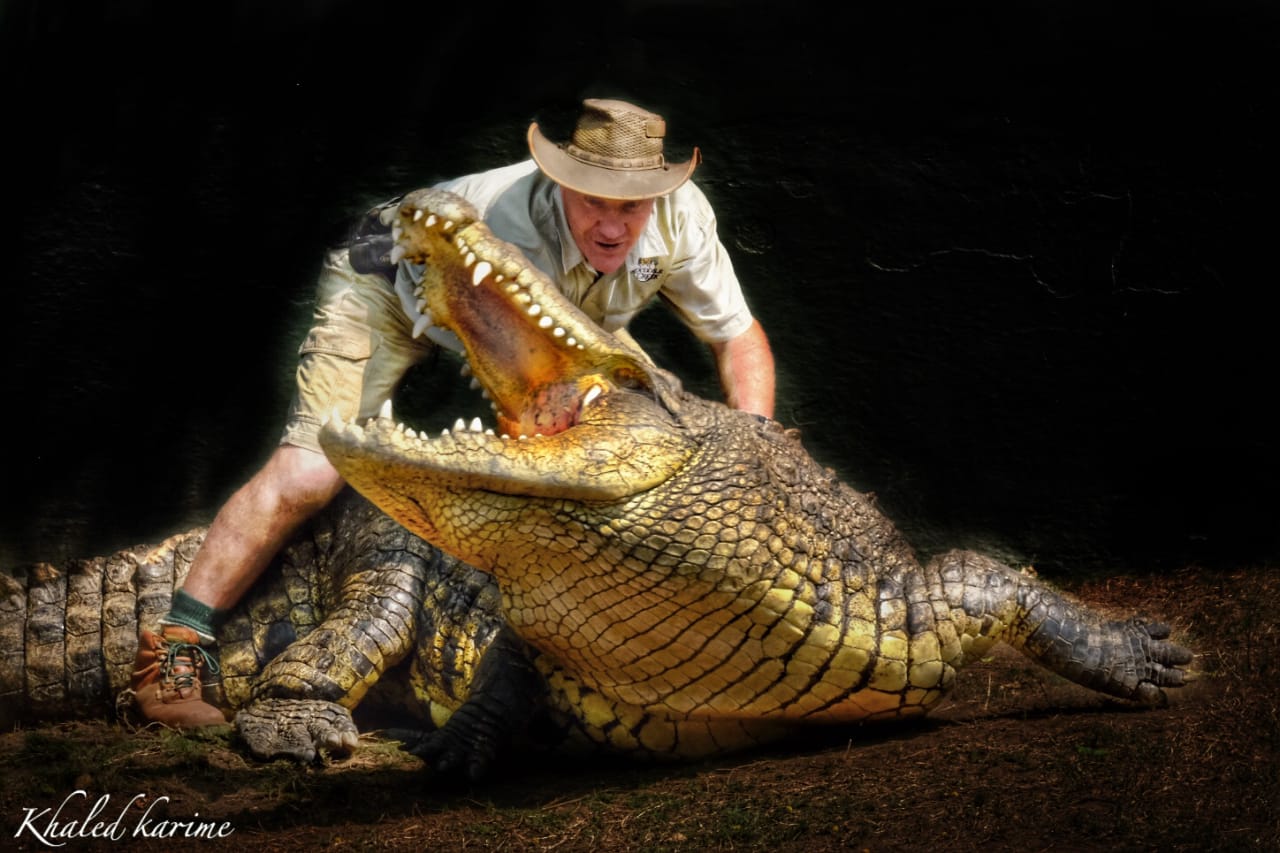 There can’t be many unreformed killers on the FunShine Coast enjoying themselves more than Umthakathi. “He came from the Nseli River. He killed a 12-year-old boy,” says Sean Le Clus of the big male Nile crocodile (Crocodylus niloticus) menacingly near his feet.

“It’s a fantastic sentence for murder. You lie around the pool and get fed 365 days a year. All you have to do is ensure the girls produce.”

“The girls” Le Clus is referring to are the six females that make up Umthakathi’s harem.

They are just a few of the about 4 000 crocs (plus a few alligators and snakes) that call Crocodile Creek home.

The crocodile farm near Tongaat (and a 40 minute drive north of Umhlanga) reopened to the public at the weekend (27 June) as the authorities began easing lockdown restrictions.

And by happy coincidence, from now through to spring is the best time for people to visit, says Le Clus, the farm’s larger-than-life manager.

That’s because crocodiles are poikilothermic.

Like most reptiles they absorb the heat they need from their surroundings, conserving their energy.

So in the cooler months they spend most of their time basking in the sun.

Whereas if you visit in the hot December holiday season, many will be out of sight – under the water cooling down, he explains.

It’s just one of the many fascinating facts that come to life on a tour of Crocodile Creek, as Le Clus mixes biology with a wealth of anecdotes from a lifetime working with reptiles.

But back to Umthakathi (from the Zulu for evil wizard), Le Clus clearly has some affection for the about 400 kilogram beast who was removed from the wild after killing a child in Zululand around 1999.

“Where are you Umthakathi? Are you going to say hello? Come my boy!” he calls out, climbing into its enclosure.

Next, Le Clus approaches a patch of ground where Umthakathi and the girls are sunning themselves, next to a deep green pond.

A few logs serve as a low bridge over the water.

Umthakathi is territorial and with little provocation his jaws are open and snapping.

Crossing the bridge in summer when the crocs generally eat is a no-no, says Le Clus.

Like all crocodiles, Umthakathi, estimated to be about 50 years old, was quick and quiet.

The 4.6-metre-long animal can slip into the water without a sound and come up beneath you on the bridge in seconds.

Le Clus tells how during a careless moment while doing a show for the public on 13 November 2001, the big male “opened up the bottom of my leg”, leaving him hobbling around for the best part of 11 months.

Had he been wearing gumboots at the time, as was normally the case, Le Clus reckons Umthakathi would have got a better grip on him.

“It would have been game over…

“You have these close calls,” says Le Clus cheerfully.

A few weeks after the incident Umthakathi lost a couple of the teeth that he had used in the attack. One of which now adorns the croc wrangler’s wide brimmed leather hat.

A sheath knife and a multitool on a crocodile skin belt with a matching buckle add to the picture.

We met Le Clus in the visitor’s boma earlier, where he began the tour with a talk.

Titch, a four-year-old male (the audience received a crash course in croc sexing) Nile crocodile, had come along for a show-and-tell.

The Crocodile Creek farm manager tells us how crocodiles have changed but little over hundreds of millions of years and how brilliantly they have adapted to their environment.

For example, they can move their organs around inside their bodies to maintain balance in the water.

He points out the osteoderms (bony skin) and tail scoots that help crocs swim without a wake – silently and efficiently.

“You won’t know it’s there until it’s on top of you,” says Le Clus.

They can hold their breath for up to two hours, bringing their heart rate down from 40 beats to four beats a minute and shifting blood supply to the brain.

They have ears, he says, peeling back a flap of skin for us to see.

But if the water was dirty, as is often the case, crocs have sensory pores, small indentations, all over their bodies that let them detect vibrations up to 15 kilometres away, helping them to locate prey.

Incidentally, says Le Clus, the little indentations are a good way to tell if any piece of crocodile hide presented to you is indeed the real thing.

We took a good look inside Titch’s mouth, marvelling at his sharp little teeth.

Crocs have 66 in all and they can grow up to 45 replacement sets in a lifetime.

Titch’s tongue was pale yellow in colour and fixed. A flap prevents water getting down his throat.

Crocodiles have five toes on each of their front feet. Their hind feet each have four, two of which are webbed.

Two toes on each front foot are without nails, and one on each hind foot.

Sometimes they lose a few digits or even a limb in fights, but manage pretty well.

Le Clus showed us the preserved snout of a 3.5-metre female.

The croc lost her snout – a 12-centimetre length of bone, flesh, teeth and nostril area – during an altercation with a neighbour over a nesting site in November 2019.

Within four weeks the wound had closed up and the bone healed, all without any medical intervention.

“She will probably lay eggs again this year. Life will carry on as normal,” he says.

There was something in the physiology of crocodiles which allowed them to mend quickly.

And this was part of the reason the animals’ body fat is prized by nyangas – traditional healers – who give it to their clients to ingest as a cure for poisoning.

Le Clus swears by the stuff too, but as a topical treatment for cuts and the like.

We leave the boma, pausing to examine some baby crocodiles. They were certainly not cuddly, but appealing in a grotesque sort of way.

Then, after passing a few snake enclosures we reach a dam where about 75 crocs are lying near the water, many on top of one another.

It’s a great, horribly wonderful stew of reptiles, soaking up the sun.

Le Clus says younger crocodiles crowd close to each other for the sense of security that comes with numbers.

They pay no attention to “the social distancing thing”.

In a tree above the dam, grey herons are nesting. And elsewhere on the farm, extending down towards the Tongati River, Le Clus says he has counted 70 species of birds.

Some people are critical of crocodile farming – the animals are kept and slaughtered for their hides, meat and fat – but Le Clus points out that it is a valuable way to conserve the animals.

There are about 400 000 crocodiles on croc farms in South Africa, compared with only 9 000 in the wild. And the future of crocodiles looks dark as the rivers where they live are increasingly threatened, particularly by pollution.

We pause to check out the American alligators (Alligator mississippiensis) in another enclosure and then take in a collection of West African slender-snouted crocodiles (Mecistops cataphractus).

The slender-snouts are a critically endangered species and Crocodile Creek breeds them solely for sale to zoos and collectors.

Before we reach Umthakati, Le Clus takes our group to see the real star of the show, Hannibal.

He weighs more than 600kg and is 5m long. Truly a monster and a well travelled one at that.

The Nile crocodile was brought to Crocodile Creek from Botswana, by way of Namibia, to save him from a severe drought in the 1980s.

Crocodiles grow at different rates so it’s hard to say precisely how old he is, but the best guess puts him at about 76.

Hannibal shares an enclosure with his “girlfriend” July and can be a cantankerous companion.

But that had nothing to do with his name and any association with cannibalism: Courting is often a rough business with crocodiles, says Le Clus.

Rather, the giant crocodile is a survivor, a warrior, and was named for the great Carthaginian general of antiquity.

The giant croc is basking in the sun as Le Clus climbs into his enclosure, armed with nothing but a stick, a sheath knife (apparently if it’s you or the crocodile, go for its eyes) and plenty of experience.

He straddles Hannibal and with a little encouragement and some tickling gets the croc to do a high leg-press.

It was part of Hannibal’s routine. He was accustomed to it and his surroundings; tolerant really, says La Clus.

Crocodiles were most certainly man-eaters but they aren’t vindictive and will not attack without reason, he says.

The big croc had probably last fed in March.

In January and February he had worked his way through about 30 kilograms of horsemeat, beef, fish and chicken.

But it was winter now.

It will be a few months more till mealtime…

The farm has a children’s play area and hosts parties. T

here’s also a shop where you can buy crocodile leather goods and a coffee shop with crocodile burgers on the menu as well as less exotic fare.