Umhlanga’s big-hearted Humphrey has eye on the prize

August 3, 2020 | Umhlanga Tourism | Comments Off on Umhlanga’s big-hearted Humphrey has eye on the prize 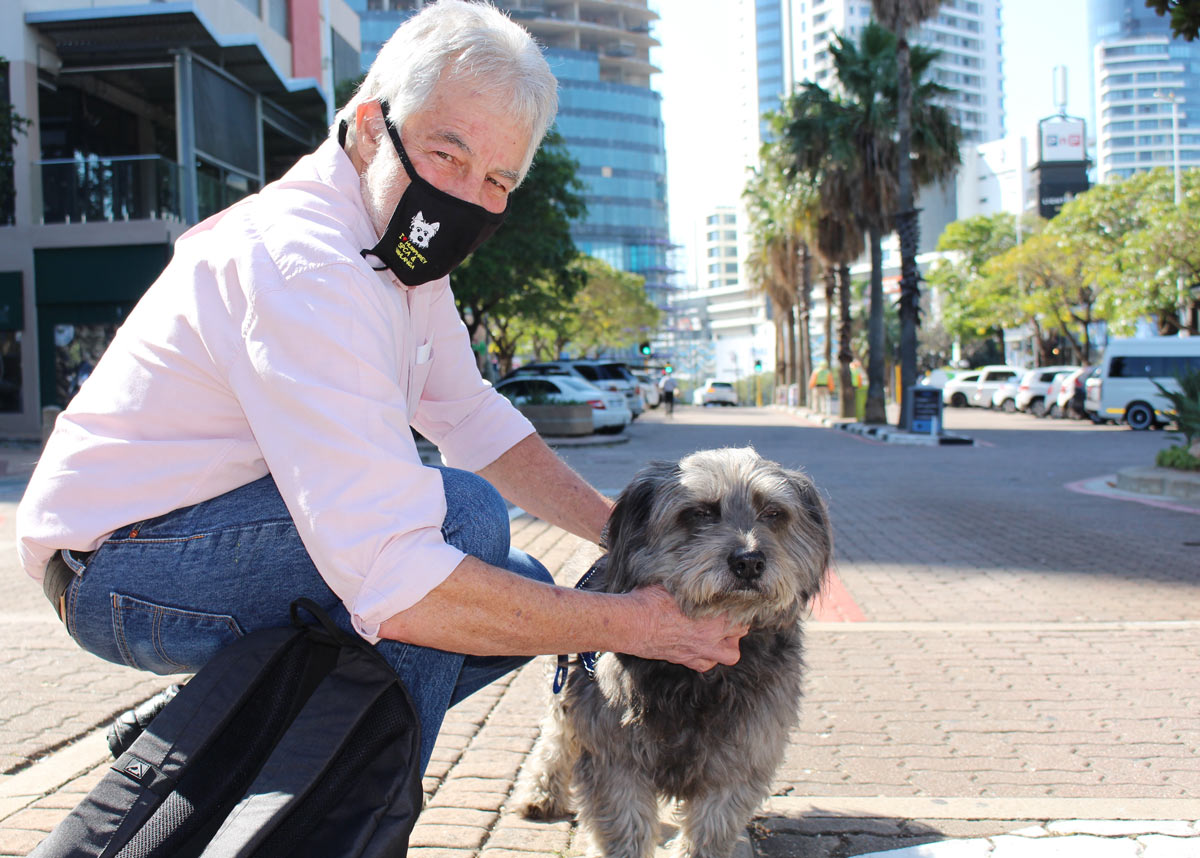 Umhlanga Tourism’s loveable mascot Humphrey is fast approaching the R700 000 mark in his collection for the SPCA. And his owner, Alwyn Immerman, reckons R1 million is in their sights.

We caught up with the pair the other day and can confirm the pooch has lost none of his charm. While Immerman remains smitten and has a rich store of tales to tell about his pet… and some plans for the future.

Locals and regular visitors to Umhlanga will recall that Immerman adopted Humphrey from the Durban and Coast SPCA in 2011.

Humphrey had been mistreated by a previous owner and was in a poor condition.

But Immerman, a pharmacist by profession, nursed the abused dog, then about one year old, back to good physical health.

Mending the dog’s crushed spirit took rather longer, however.

But Immerman persisted and Humphrey eventually came out of his shell.

Man and dog are now inseparable.

They walk the Umhlanga promenade at sunrise daily.

On Thursdays and Sundays Humphrey accompanies Immerman to Umhlanga’s MediSport Pharmacy, where his master works. There he takes his place, just inside the store, near a jar and a big box for his SPCA collection.

But it looks like the pooch got the best bits from a terrier, perhaps a poodle and a few other breeds. Think a shaggy-haired canine, somewhat like Boomer, the star of the eponymous American TV series of the early 1980s.

In other words, endearing in appearance and nature.

The dog is a hit with people from all walks of life.

He livens up the lives of the elderly on visits to homes. Children, including those with special needs, warm to him immediately.

And although a quiet, well behaved dog, Humphrey was able to summon up his best mongrel spirit when Immerman had a brush with a pickpocket a few years ago.

Whatever it is, people (pickpockets aside) can’t get enough of the dog.

Perhaps four or five times a day, fans and friends pop by the pharmacy to say hi or to take him out for a walk, said Immerman.

He tells of a couple from England, Jane and Rob, who come to Umhlanga every year to stay in their timeshare and who always make a point of arranging a date with the dog.

“They email me and say, ‘Can we book Humphrey’. My first reply is, ‘I will check his diary’,” said Immerman with a chuckle.

The couple usually walk Humphrey to the little park nearby, at the corner of Lighthouse Road and Lagoon Drive, and they always make a generous donation to the collection.

Immerman, a lively 73-year-old who lives in nearby La Lucia, has plenty of other stories about how Humphrey brings out the best – and the most generous – in people.

A few years ago, shortly after the Sunday Tribune carried a report about Humphrey, a man walked into the pharmacy, not a regular.

“That was a nice story. I would like to make a donation,” the man told Immerman.

The pharmacist was busy at the dispensary so could not give the man his attention, but some time later when he looked up, the fellow was still standing there.

“Let me show you where the donation box is,” said Immerman.

“You don’t understand,” the man replied, “It’s not big enough.”

Immerman gave the man his bank account details and the following day discovered R10 000 had been deposited. Delighted, but concerned the man may have made a mistake with the decimal point, Immerman contacted him.

Would he like to meet the SPCA? No, the man insisted on remaining anonymous.

But what to do with the windfall?

The manager said they had enough pet food, but had run out of the blankets they gave to traumatised dogs and it was the middle of winter.

In the end, the money stretched to buy nearly 100 special, extra tough blankets, made to resist sharp teeth and claws.

The blankets went to a number of SPCA branches in the province.

Then there was the Rolls-Royce incident, four or five years ago.

“I was walking with Humprehy and a friend along Ridge Road. A Rolls-Royce came past, going really fast. One hundred yards farther, its brake lights came on,” Immerman recalled.

The car reversed back and a window came down.

The less well-to-do are just as anxious to help.

Immerman tells of a former Umhlanga hairdresser who found R300 in the street near the pharmacy and donated it to the cause, despite her own finances being in poor shape.

Others give regularly to Humphrey’s collection through stop-orders.

Immerman said he had taken Humphrey to quite a few schools, where “not only the donations have been phenomenal”.

It’s been a “fantastic” chance to spread an important message, as he explains it:

People “rush out and get a dog because it’s cute”, but then treat it poorly when house-training and caring for it becomes a burden.

However, if you are looking for a loyal friend and you are ready to man up to the responsibility that come with owning a dog, visit the SPCA.

“There are lots of beautiful dogs crying out for love and a good home; dogs that have been badly abused or abandoned,” said Immerman.

He said he was heartened by a visit to nearby Atholton Primary School, which prompted a number of children to get their parents to adopt from the SPCA.

Humphrey has even done his bit more directly to bring would-be owners and needy dogs together.

Usually afraid of other dogs, Humphrey befriended a bedraggled Jack Russell that had been brought to the SPCA.

It prompted Immerman to send a picture of the dog to his pal George Doering, who had been looking for a dog.

The Jack Russell, subsequently named Max, now has a loving home of his own.

To this day, the two dogs still hit it off when they meet on the promenade.

All these outings and daily walks means Humphrey, who is about 10 years old, was in good shape.

“The vet said he has the heart of a puppy,” said Immerman, who was looking forward to many more years together with Humphrey.

Shape of things to come

Any plans for the future?

Immerman reckoned that at the rate they were going they should hit their R1 million fund-raising target within a few years.

Thereafter, he would like to see a statue erected in Humphrey’s honour, somewhere in Umhlanga.

“I’ve spoken to Peter Rose about it,” said Immerman, referring to the Umhlanga Tourism chairman.

The statue could be Umhlanga’s answer to Simon’s Town’s Just Nuisance.

Just Nuisance, a Great Dane, was officially enlisted in the Royal Navy during World War II and was a great favourite with sailors.

The big dog – nearly 2m tall when on his hind legs – was remembered with a statue overlooking the Simon’s Town harbour.

There is no harbour in Umhlanga, of course, but there are plenty of fine views of the lighthouse and more. There’s also space, perhaps, for something in bronze to honour a certain big-hearted dog in a million.