Where eagles dare (and nudists bare)

August 24, 2020 | Umhlanga Tourism | Comments Off on Where eagles dare (and nudists bare) 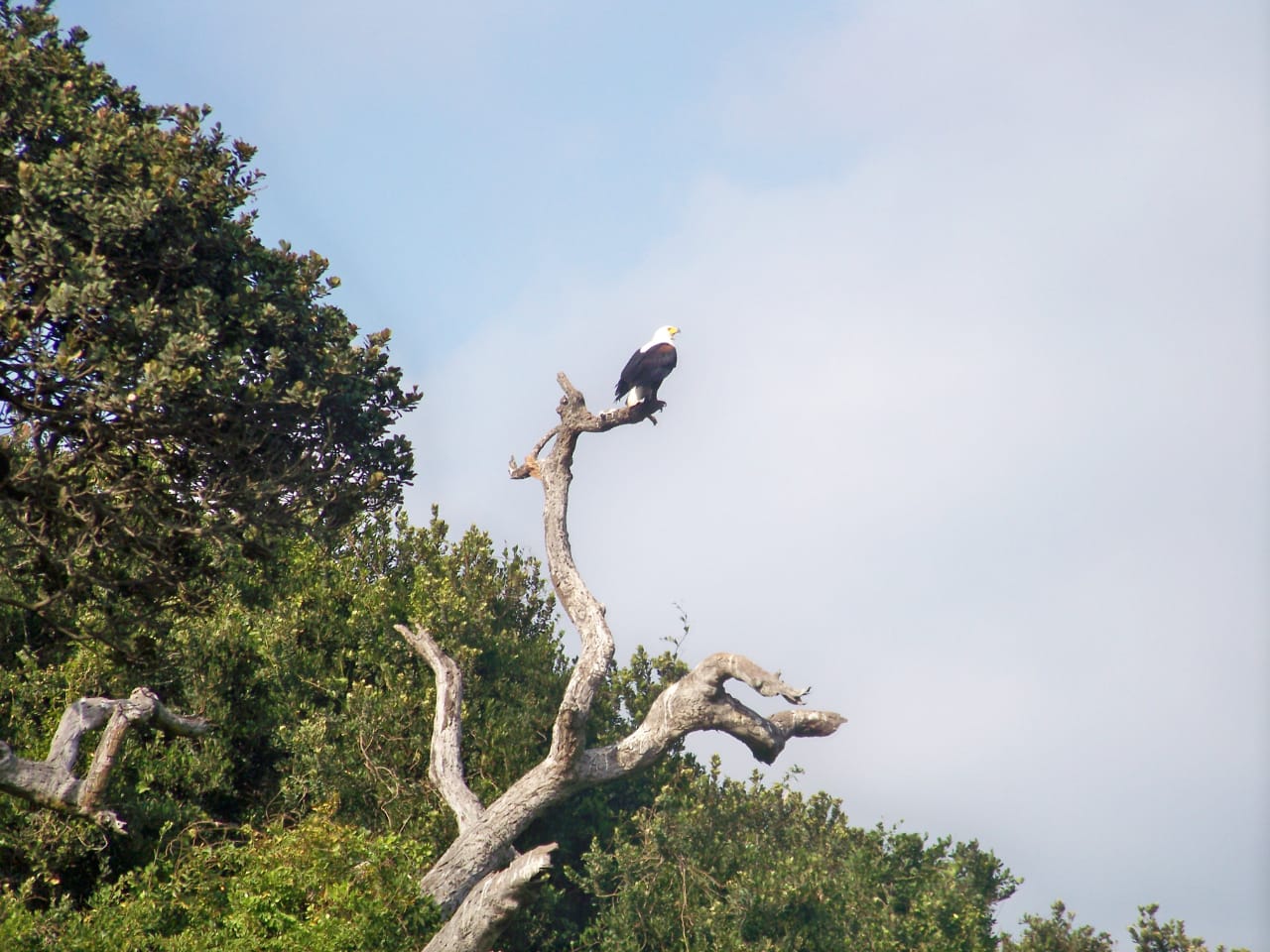 In the last blog in this series, we followed the trail atop the dune at the Umhlanga Lagoon Nature Reserve. From the end of the dune, some 200 metres distant, lies the Ohlanga River mouth. It happened to be open to the sea. But often a sandbank closes it. It’s a mostly natural process (artificial breaching does happen), with wave action, sand migration and rainfall all playing a part.

The goliath heron we had seen earlier was closer here.

Then, as we stood shooting the breeze, an African fish eagle (Haliaeetus vocifer) caught our eye. It was riding the air currents, circling above the lagoon.

The Hawaan forest, above the M4, provided the backdrop.

Further in the distance, Sibiya casino loomed in the haze, on a ridge above the cane fields, its outline echoing traditional grass huts.

Without warning, the big bird dived to the water.

It was too far off to tell, but it may have caught something, perhaps a Mozambique tilapia (Oreochromis mossambicus) or a mullet (Mugilidae).

It was also too far to say if there were any naked people on the beach, or near the Ohlanga River mouth.

The area is an unofficial nudists’ beach, although public nudity remains prohibited in South Africa and the law views it as indecent exposure.

Chisale sees it as a distraction from the area’s natural beauty and “precious sights” like the fish eagle we had witnessed.

It was discouraging for families visiting the reserve, he said.

At any rate, a north-easter was freshening up and it was a little after midday. So if any nudists or naturists (not to be confused with naturalists – a very kettle of fish) were about, they were sheltering out of sight.

We descended a steep section of dune onto the beach.

The path here was eroded and Chisale hoped it might one day be replaced with a contour path down to the beach on the inland side of the dune.

This, he said, would have the added benefit of bringing more walkers into the area, discouraging nudists.

A score or so metres on we reached what he believed may be the remains of a shell midden – a pile of what looked like discarded oyster and other shells, compacted into rock – possibly many hundreds of years old.

Archeologists have identified a number of middens in the Umhlanga region – where stone age and other communities dumped domestic rubbish.

These includes on a hill overlooking the upper reaches of the Ohlanga lagoon, about 1.6 kilometres from the seashore. Here archeologists have found shells, animal bones (including those of a child) and pottery shards, which suggested the midden was in use before AD 1550.

In Umhlanga Rocks proper, above the beach near the Beverly Hills Hotel, archeologists in 1968 excavated a shell midden. Using carbon-radiation, they dated it to about AD 1600.

By appointment and time allowing, Chisale will take you to the Ohlanga River mouth. Here the rare African black oystercatcher (Haematopus moquin) and other species can be found.

Otherwise, it’s back the way we came or southwards along the beach, before reentering the forest at the northern end of the  O’Connor Promenade.

The beach walk with its fine views of Umhlanga Rocks and the lighthouse is an appealing option, particularly if you are staying at one of the beachfront establishments and going that way.

But the savvy walker adapts to the conditions.

The same wind that may have driven the nudists indoors made the sheltered forest trail the better return route.

We retraced our steps but added a dog’s leg, taking in the southern boardwalk and the short stretch of reserve closest to the promenade.

Somewhere near the big buffalo thorn tree (as detailed in the first blog in this series) we paused to watch a blue duiker (Philantomba monticola) a dozen metres from the path.

Just then a slender mongoose (Galerella sanguinea) passed by in the dense undergrowth.

The little omnivore (they eat the odd berry in addition to a regular diet of lizards, snakes, rodents and such) did not stick around long. But there was time for Chisane to note a black-tipped tail – a reliable way to identify the animal.

And here’s another top tip of another sort for you. If you want to get better wildlife pictures, take your time.

Blue duikers (iphithi in Zulu) can be shy. But eventually we closed the social distance and stole a passable photograph before the little creature slipped away.